Royal Manchester Children’s Hospital Charity has received a £3,000 boost thanks to the efforts of a team of hardy fundraisers from Manchester contractor Russells Construction. The eight-strong team raised the money in sponsorship and company donations after completing a 20k Tough Mudder challenge.

The race saw teams from across the country tackling the elements, battling through the mud, and taking on a variety of obstacles including high walls, water jumps, and cargo net crawls. Dean Moran, one of the organisers, said: “It was a great day, but the challenge certainly lived up to its name; it was very tough and very muddy! It was pretty hard work but teamwork and camaraderie made it a lot of fun. I would definitely do it again and the others have said the same, but not too soon.”

Dean was among those who enjoyed a recent tour of the hospital to meet staff and see the facilities which have been improved by fundraisers over the years. He said: “We are very lucky to have Royal Manchester Children’s Hospital here in Manchester, the hospital is incredible and the charity does amazing work raising money to support the medical staff and facilities. The hospital has helped so many people in our region, including family members of some of our colleagues, and we really just wanted to do or bit to help.”

The donation will go towards the Charity’s Time Saves Lives Helipad Appeal, which is raising vital funds towards building a 24-hour access helipad at the central Manchester hospital site. Currently, the hospital relies on a secondary landing site in a local park, adding precious minutes to the transfer of an incredibly ill child. An on-site landing pad will help to dramatically reduce patient transfer times by up to two thirds and, in turn, will help to save lives and improve patient recovery.

Joel Oxberry, Corporate Fundraising Manager at Royal Manchester Children’s Hospital Charity wanted to thank the Russells team for their grit and determination in raising the money: “We are incredibly thankful to the Russells team for taking part in this challenge in support of our children’s hospital. We know that Tough Mudder is not for the faint-hearted, so the team should be very proud of their achievement! The money raised will help bring us one step closer towards our Helipad Appeal target.”

Russells Construction director Andrew Russell added his praise, he said: “The company has been a long-time supporter of RMCH and the lads have done an excellent job raising a huge amount of money to support their vital work.” 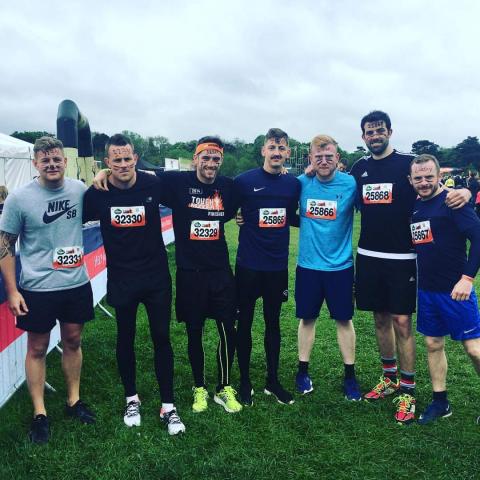