Just one year ago, 17 year old Molly Howarth received the devastating diagnosis that her frequent headaches, nausea and dizziness were actually symptoms of a cancerous brain tumour. The teenager, from Rochdale is now supporting Royal Manchester Children’s Hospital’s Be Seen in Green Day on 7th July which is raising funds to support children and young people diagnosed with brain tumours.

Be Seen in Green is Royal Manchester Children’s Hospital’s flagship fundraising day and asks schools, companies, community groups and individuals to support the hospital by wearing green and paying just £2 to take part.

This year the event is raising funds to support children and young people diagnosed with brain tumours. Sadly, brain tumours are the most common solid tumours of childhood and are responsible for more deaths than any other childhood cancer.

With only a few centres globally able to offer this service, all funds raised will go towards providing our clinicians with DNA methylation profiling technology. This cutting edge technology will help accurately diagnose the different types of brain tumour quickly, so that we can provide the best and most appropriate treatment quickly for our young patients.

It was early May 2016 when Molly’s first signs of illness began.

Her mum Jane comments: “Molly kept complaining of a bad headache which lasted a few days, then later she was really disorientated, feeling sick and dizzy; she felt like she was bumping into walls at school. As her symptoms worsened she was referred for an MRI scan.

“I’ll never forget when I received the phone call from Royal Manchester Children’s Hospital asking me how quickly I could get to the hospital. I knew then that they’d found something, and that it wasn’t going to be good news.

“At the hospital, we were given the news we had been dreading; that Molly had a cancerous brain tumour. Surgery was booked and thanks to the hospital’s incredible surgeons the entire tumour was removed. For now Molly is doing really well but she is still under the care of Royal Manchester Children’s Hospital and has to visit every three months for a scan. We honestly cannot thank the hospital enough for the care they have shown our family, they have been nothing short of amazing which is why we are passionate about supporting this event.”

“Our Be Seen in Green Day is a calendar favourite. It’s so accessible, everyone and anyone can take part. By simply wearing the charity’s signature colour, it is a brilliant opportunity to spread awareness for such a worthwhile cause. We’re really thankful to have Molly sharing her story to encourage others to get beyond our fundraising day and help other children in a similar situation. This equipment is so important as it will help get a more accurate prognosis for young brain tumour patients so they can receive the best and most appropriate treatment, as quickly as possible.” 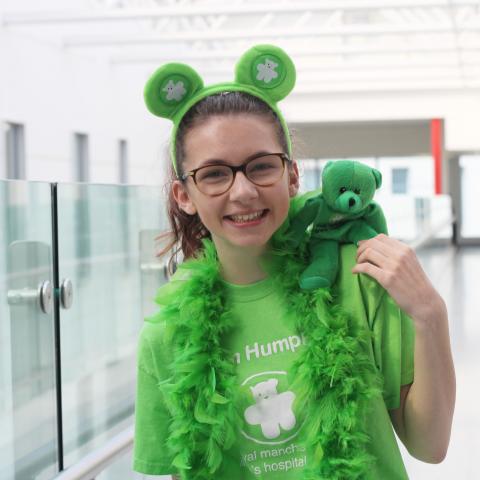