When Megan Colclough was just two weeks old, she was rushed to her local hospital following a bout of severe sickness. Her doctor noticed some abnormality regarding the shape of her skull, and sent her for further tests. Megan was diagnosed with dysplastic corpus callosum, a condition which meant that part of the right side of her brain had not developed how it should, and her parents Claire and David were confronted with the devastating news that their daughter may never walk.

Little Megan defeated the odds and although she does have limited mobility, and suffers from epilepsy and problems with her grip and her balance as part of her condition, she amazed her parents at just two years old by taking her first steps.

On 15th October, Megan will be joining a team of other youngsters in raising much needed funds for the Royal Manchester Children’s Hospital, where she has regular appointments, by taking part in the hospital’s very first 2km Lantern Walk in the city’s picturesque Heaton Park.

Megan will be taking part in her wheelchair, as the 2km distance is a little far for her to walk, but her best friend Ellie Stott will be joining her on the route and helping to push her around.

Ellie was diagnosed with Generalised Joint Hypermobility Syndrome when she was just three, which means that she suffers from chronic pain, swelling and fatigue, problems with her balance, and digestive problems which add to her discomfort.

Despite her pain, determined Ellie was eager to take part in the walk when she found out about it, especially as it was in support of the hospital where she still undergoes treatment for her condition – in fact, it was Ellie that suggested that Megan take part.

“Her condition affects her emotionally but despite all of this, Ellie never lets it bother her, and she achieves the best she can in whatever she does or takes part in. I told Ellie about the walk and she was really keen on joining in,” said Ellie’s mum, Joanne. “She said she wanted Megan to do it with her. I did say it might be too far for Megan to walk but she said it was ok, she had a wheelchair and she would push her around!”

The two girls share a special bond and are best friends in and out of school - Ellie has even received certificates for the help that she gives Megan at St Mary’s C of E Primary in Rochdale, with things like getting changed or pushing her chair.

The Lantern Walk won’t be the first time that the girls have fundraised for Royal Manchester Children’s Hospital; in the past, they have both raised hundreds of pounds by taking part in the charity’s sponsored ‘Be Seen in Green Day!’ However, Megan and Ellie are really looking forward to raising even more with this challenge. They will be joined on the walk by their mums and Ellie’s sister Jodie, and will be cheered on by Megan’s dad and four year old twin sisters Jessica and Katie, and Ellie’s dad Antony and brother Charlie.

Angela Rowe, Community Fundraising Manager at Royal Manchester Children’s Hospital Charity commented: “We’re incredibly grateful to Megan and Ellie for saying thank you to our hospital in this special way and taking part in our brand-new Lantern Walk event. We can’t wait to see hundreds of fundraisers at Heaton Park, helping us to raise funds for the poorly children treated at Royal Manchester Children’s Hospital.” 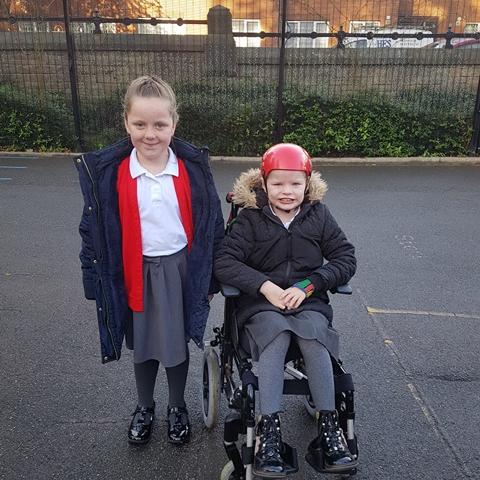