The Road To Ace Grace Place

THE family of a little girl who passed away from a rare and aggressive form of cancer have walked more than 120 miles in her honour.

“The Road to Ace Grace Place” was a challenging hike from Worsley to Filey to raise funds for Royal Manchester Children’s Hospital Charity in memory of Gracie Jones. Dodging thunderstorms, sore legs, painful blisters and wrong directions were par for the course but her parents Caroline Hart and John Jones made it to the finish-line on Saturday evening.

The walk not only raised more than £11,000 for the hospital’s oncology unit, Ward 84, it was also an opportunity to raise awareness of a house John and Caroline have purchased, aptly named “Ace Grace Place”. The house in Filey can be used by Ward 84 children and their families for respite and relaxation by the coast.

Along the route, friends and family members joined them on a leg of the walk, but Caroline, John and Caroline’s brother Steven completed the entire course – a gruelling four days of hiking from Worsley to Filey, via York.

“It was definitely painful, especially towards the end, but it was an absolutely brilliant experience,” said John, 43, who lives with Caroline and their son Freddie in Worsley, Salford. “It was such good fun and a great laugh – so many friends and family were able to join us for a day of walking so that really made it special. And lots of people were encouraging us with texts and posts on our Facebook page too.

“There were some low points and times when we really thought we’d have to give up, we were so sore. But then towards the end of Day 3 a huge rainbow appeared right over our heads from one side of the road to the other and that was definitely Gracie encouraging us on. That was her telling us to keep going.”

Gracie, who was born in February 2011, was just two years old when Caroline and John noticed a little lump on the side of her nose. She was referred to an Ear, Nose and Throat specialist at her local hospital, but just before her third birthday the family were told she had a rare and aggressive form of cancer known as Aveolar Rhabdomyosarcoma.

It was then she met a consultant on Ward 84 – a place the family would come to think of as their second home – full of friends going through similar journey’s to Grace.

“Everyone on Ward 84 looked after us incredibly well,” said Caroline, 42. “She loved it there and she was always singing and dancing for the staff – she made a bit of her name for herself as a performer on the ward.

“As much as possible she just wanted to be a normal little girl. She was full of confidence and had no issue standing in front of a group of strangers and doing a dance show for them.”

After her initial diagnosis and nine months of chemotherapy Gracie spent a blissful year at home – back with her family and cancer-free. But unfortunately the cancer returned when Gracie was four-and-a-half years old.

“It felt like we’d just started getting back to normal when it came back again,” said Caroline. “In the end it just took over and we lost her in June 2017.

“Although she went through some really intense treatments she never really let it get her down. She took it all in her stride.

“She was a huge fan of singing and dancing and she loved performing to Madonna. She was a particular fan of Papa Don’t Preach so that’s the song we warmed up to before setting off on the walk to Filey.

“She was a sassy little diva and very into the 80s style and image – she was born in the wrong decade! She was very much the life and soul of the room she was in.”

It is Gracie’s zest and positive attitude which has always been behind her parents’ fundraising for Royal Manchester Children’s Hospital Charity. Over the years, they’ve raised thousands of pounds for the Charity and their latest fundraiser means their grand total now stands at £72,515.94.

As well as the walk to Filey, the family have held a number of fundraising events. Arguably the toughest was back in October 2017 when John and his friends walked from Worsley to Snowdon, up Snowdon and then back again to Worsley – a round trip of about 180 miles.

All their fundraising goes to projects benefitting Ward 84 and the hospital’s oncology services. The latest project the family will help to fund is a refurbishment of the ward’s outpatient consultation rooms, to make them more child-friendly when children are seeing their consultants and specialists, and the playroom, which will be kitted out with the latest equipment.

Not only was the walk a fundraising opportunity, it was also a chance for the family to announce their new Ace Grace Place – a house they have bought in Filey which families from Ward 84 can stay in for holidays.

“Gracie loved Filey and I know she would want us to continuing holidaying there,” said Caroline. “She’d be very happy to know lots of children could enjoy the place like she did.”

Angela Rowe, Senior Community Fundraising Manager for Royal Manchester Children’s Hospital Charity, has known the family for a number of years. Angela was able to go along to see the family setting off on their walk and took along Charity mascot Humphrey Bear, so he could wave them off.

Angela said: “Caroline and John are just amazing at what they do – they have raised an incredible amount of money and it really has made a substantial difference to families on Ward 84.

“I’m sure Ace Grace Place will be able to fulfil the ethos we’ve always had as a charity too – to make a difficult time in someone’s life that little bit easier. And having heard all about Gracie and her love of the limelight I’m sure she’d be very proud to know all of this is being done in her name!” 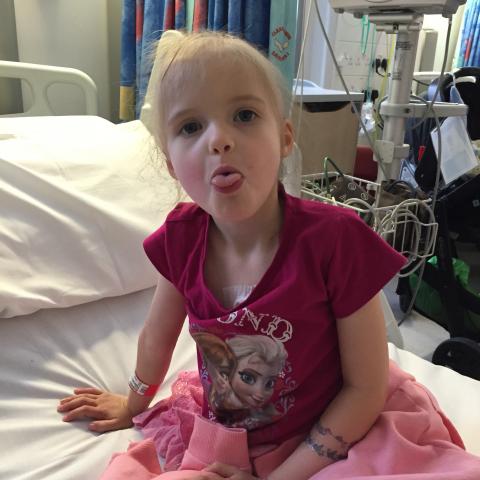