A Ride for Adam’s Pedal Power Against the Elements

On 19th July ‘A Ride for Adam’ entered its fourth year on what would have been Adam Kawalek’s 14th birthday. The event, which has grown year on year in popularity, started as a tribute to Adam, a ten year old boy who died in March 2011 after suffering from leukaemia.

Adam spent four and half years under the care of Royal Manchester Children’s Hospital and the 90 mile cycle route follows the path that Adam took from his home in Conwy to the hospital almost every week.  Raising an incredible £4,000 so far this year, the money raised is being used to create a support guide for families of children with leukaemia.

Setting off from Royal Manchester Children’s Hospital, Humphrey Bear, the charity’s mascot, ensured spirits remained high as he waved off the brave riders. Despite the wild winds, the cyclists completed the ride in an impressive 9 hours. The weather didn’t make for ideal cycling conditions but nothing deterred the 22 cyclists who took to the road for an emotional ride to Adam’s home town.

The support guide, designed by Creative Spark, provides essential information on Bone Marrow Transplantation, a major medical procedure that is required for children who have serious illnesses of their blood. Adam’s family, patients and staff at RMCH have all contributed towards the bespoke guide which will be given out by the hospital.

Before the race volunteers handed the guide to Helen Webster, BMTU Clinical Nurse Specialist, who accepted it on behalf of the hospital.

Rob Wynn, Director of the Paediatric Bone Marrow Transplantation Programme at Royal Manchester Children’s Hospital said: “The resulting guide is fantastic and is a really important part of our preparation with families before their child’s transplant. No transplant is easy. No family wants to go through this. However for those that do, preparation and information is vital.

Without this charity ride such an initiative could not have been funded. On behalf of all of our BMT team I would like to thank the riders and the organisers for such an effort. It means a lot to us and to those that need our work.”

Angela Rowe, Community Fundraising Manager for Royal Manchester Children’s Hospital Charity added: “We are incredibly grateful to all the cyclists who bravely endured some of the wettest weather we’ve had for a while to cycle for Adam. I know through my contact with other families that this guide is an essential tool in preparing them for a transplant. It is extras like this which really make a difference.”

More information on the event can be found at http://arideforadam.org/. 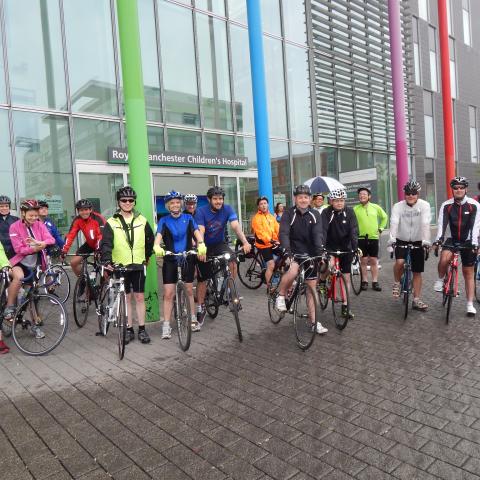