A local vicar is kayaking the waterways of Cheshire to raise money for Royal Manchester Children’s Hospital.

Reverend Murray George of Congleton United Reformed Church will be kayaking a hundred mile stretch of the Macclesfield and the Trent and Mersey canals to raise money for the Children’s Brain Tumour Research Network (CBTRN), hosted by the hospital.

The challenge, which will begin on Monday 27th July and is expected to take four days, will see the Reverend navigate the waters between Kidsgrove up to the Anderton Boat Lift and then between Hall Green and Marple.

Reverend Murray has chosen to support the specific project after young congregation member, 9 year old Elliot Browne was recently diagnosed with a brain tumour. Since then the church has been raising funds for the hospital, recently also taking part in the hospital charity’s Be Seen in Green day which raised money for Ward 84, the regional centre for the treatment of childhood cancer.

The Reverend has already been practising his route along stretches of canal near Congleton and Macclesfield, with the support of family and friends and Labrador Leo who likes to swim alongside the kayak whenever he can. Advised by professional kayakers, he has steadily built up skills and endurance and is looking forward to the challenge of completing an average of twenty five miles each day.

His support team during the four days will be Nigel and Kennedy Browne, Elliot’s father and sister, who will be cycling along the towpath beside him. Further support and encouragement will come from Church members who will be at hand with sandwiches, drinks and collecting buckets at various points along the route.

“I was a nurse for people with learning difficulties for 20 years before being ordained as a minister in the U.R.C in 2006. I serve churches in Congleton and Alsager. I enjoy canoeing hence the sponsored 100 mile Kayak along stretches of the Trent & Mersey & Macclesfield Canals. I hoped it would be a challenge to catch people’s imagination and so raise as much as possible for two worthy causes.”

“We’re thrilled that Reverend Murray has come up with such an exciting fundraising idea, it’s definitely a first for the charity! I urge people in Cheshire to keep an eye out for him over the week and to give him a wave! All funds raised for the Children’s Brain Tumour Research Network will support crucial research at the hospital.”

Funds also raised from the challenge will go towards supporting and developing the social ministry of the United Reformed Church. The church is developing the work it does with and in the community of Congleton. 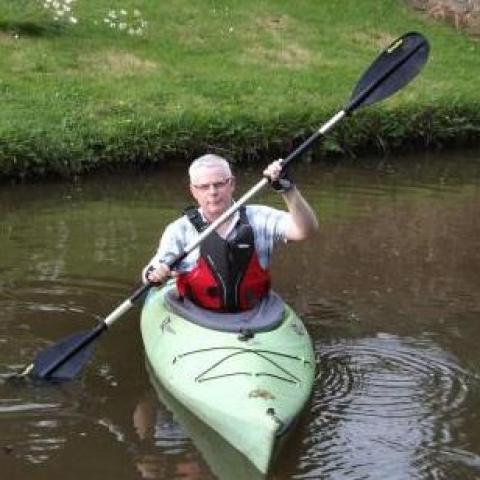