The grand opening gave visitors the first glimpse of an aspiring, ‘senses’ themed art project that has turned the department into a colourful and engaging environment for patients and staff.

Charitable support, including a generous donation from the Stoller Charitable Trust, enabled the refurbishment of the facility for children and their families participating in clinical trials, in order to make the ward more comfortable, fun and patient friendly. At the opening local businessman, Sir Norman Stoller CBE KStJ DL was presented with a plaque in gratitude for his kind donation.

“It was a real pleasure and privilege for the Stoller Charitable Trust to provide support and open the Childrens’ Research Unit.To see the fantastic facilities and meet the dedicated staff involved in treating and striving to improve the lives of some very poorly children was such a delight, it really makes the process of giving quite easy.”

The new artwork is themed around ‘investigating the senses’, with five individually decorated rooms based on five senses; See, Smell, Taste, Hear and Feel. Each room reflects the exploratory and researching characteristics of the facility, based on drawings by children treated on the ward.

The treatment room features colourful flower designs, with creatures hidden within the garden scene, designed to help to distract patients when receiving treatment. Patients are also given a sense of control when sitting in treatment chair as they are able to control the ceiling light artwork, 3D clouds and sunlight via iPad built into the chair.

The growth of the facility has also enabled more research studies to take place and provide specialist equipment, such as a new audiology research booth which will be used to develop paediatric hearing research.

“I’m delighted with the new look and feel of our Children’s Clinical Research Facility. Children on studies spend a lot of time on the ward as in-patients or attending frequent monitoring visits. During this stressful time, as well as providing clinical care to the children, we have a responsibility to make the experience for patients and their families as comfortable as possible.

I have no doubt that the Stoller Charitable Trust Unit, which has been designed with input from families, will drastically improve the experiences of our patients and families visiting our unit, and I’d like to thank everyone who has been involved in this tremendous project.”

Also present at the opening was young patient, Ava Finn, whose life was saved by pioneering research at the clinical research facility. When Ava was just shy of six months old, her parents were told their previously healthy and happy little girl had only weeks to live.  Ava was suffering from an extremely rare metabolic disease as a result of a missing enzyme.

Her parents were given the devastating news that there was no treatment available in Ireland: her only hope was a clinical trial taking place at Royal Manchester Children’s Hospital.

Three days after the family arrived in Manchester, Ava received her first intravenous enzyme replacement therapy and her condition began to improve.  Ava received weekly treatment as an inpatient at Royal Manchester Children’s Hospital for just over six months and celebrated her first birthday in hospital as a happy and healthy little girl. A week after her birthday she was allowed to go home to Ireland for the first time and is now a happy and healthy three-year-old.

“Royal Manchester Children’s Hospital boasts an enviable research facility in the Stoller Charitable Trust Unit.  The Unit has been able expand its clinical trials with a new, larger and aesthetically improved environment, not previously dreamt about. All this will ultimately lead to new cures for previously untreatable childhood conditions.

“When we embarked upon the challenge to raise the funds required to make this new unit a reality, we could not have envisaged the overwhelming support we would receive.  The future generations who will benefit from the invaluable work undertaken in this incredible facility will be forever grateful.” 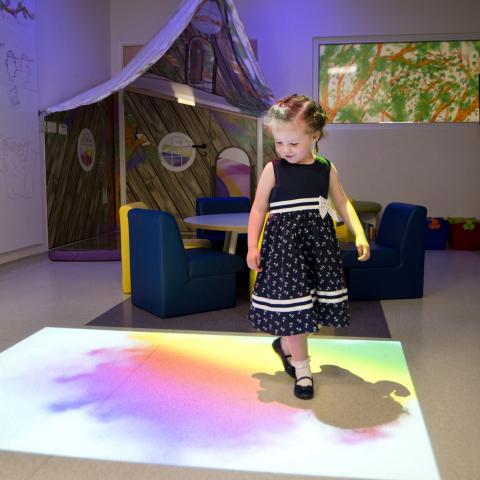