Royal Manchester Children’s Hospital Charity are an official partner of The Great Manchester Swim which takes place at Salford Quays on Saturday 19th of July, with competitors taking on a unique 1 mile dock to dock course in open water.

Rebecca and Jason joined forces to kick start the actor’s training programme ahead of the summer challenge.  Jason will be charting his progress with a video diary and picked up some tips from Rebecca on swimming technique and diet.

Jason, who is currently filming a two-part series of Lewis alongside actor Kevin Whately has never taken on the challenge of an open water swim before, also got to try out his new wetsuit for the first time, kindly donated by Aquasphere.

“I’m really excited about taking on the Great Manchester Swim for Royal Manchester Children’s Hospital Charity.  This will be my first swimming challenge but after the session today at Royle’s I’m feeling much more confident that I can complete the race in a good time.”

“I’ve been a patron of RMCH Charity for a number of years and I hope that others will take the plunge with me in July to support this wonderful cause as together we could make a big difference to thousands of children.”

Jason's preparations can be followed in a video blog.  You can watch his first training session and also get some tips from Rebecca here: http://youtu.be/iwXbb6CprGQ

“I’m really pleased to be able to help Jason get ready for the Great Manchester Swim. It’s a really fun challenge and I admire anyone who is planning to take part this year.  The event really is suitable for swimmers of all abilities.”

“The Royal Manchester Children’s Hospital is a fantastic cause which is close to my heart and I’m glad I’ve been able to give some top tips today which will be included in their online video blog for those taking part in the event.”

“It’s fantastic that Jason is getting involved in this year’s Great Manchester Swim and charting his progress with a video blog.  Hopefully this will really help to show people that the Great Manchester Swim is a challenge that can be taken on by anyone with a little bit of training.  We are still looking for people to join our swimming team and have free charity places available for any interested in taking the plunge.” 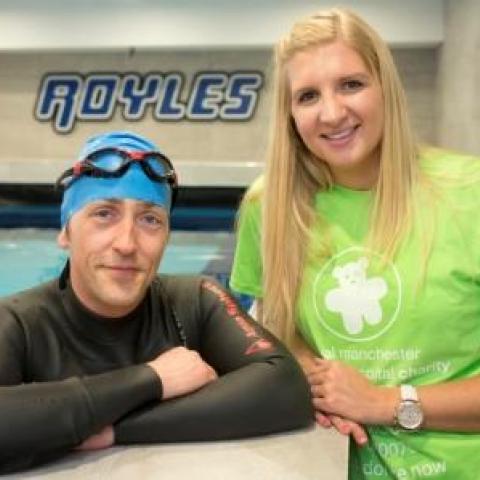