The newly enhanced radiology department at Royal Manchester Children’s Hospital opened its doors on Friday thanks to funding from Thomas Cook Children’s Charity, with a little help from Coronation Street star Antony Cotton.

The actor, who plays much loved character Sean Tully in the soap, joined visitors for the first glimpse of an ambitious, space themed art project that has turned the department into a colourful and engaging environment for patients and staff.

Artists from hospital arts charity Lime worked to deliver the scheme thanks to the generous donation of £100,000 from Thomas Cook Children’s Charity.

The new artwork, which draws on the Solar System for inspiration, now has nine individually decorated rooms based on the nine planets. Each has its own character, environment and imagery based around ideas given by patients and staff.

Young patients will be joined on their ‘journey through space’ by Raybots and X-Raybots - small models made from old computers. These little companions are displayed in cases around the department and feature in some of the new artwork.

The unveiling was led by Chair of Thomas Cook Children’s Charity Joanna Wild, who was the official ribbon cutter and one of the first people to have a tour of the newly enhanced facility.

“Our support for this project is a great example of our ongoing efforts to improve children’s lives and benefit the communities in which they live.  The finished artwork looks fantastic and we are so proud to have been involved in making the Radiology Department a calm and family-friendly environment”.

Maurice Watkins CBE, Chairman of Royal Manchester Children’s Hospital Charity’s fundraising board added: “The Radiology Department plays a key role at Royal Manchester Children’s Hospital.  Being in hospital can be a frightening time for children so having therapeutic artworks and interactive technology to distract our young patients is vital in making their treatment as comfortable and stress free as possible.

“We could not have undertaken this huge project without the generous support of Thomas Cook Children’s Charity.  With their help we are continuing to ensure that Royal Manchester Children’s Hospital isn’t just the largest children’s hospital in the UK, but also one of the very best”.

Photos of the finished radiology department can be found here. 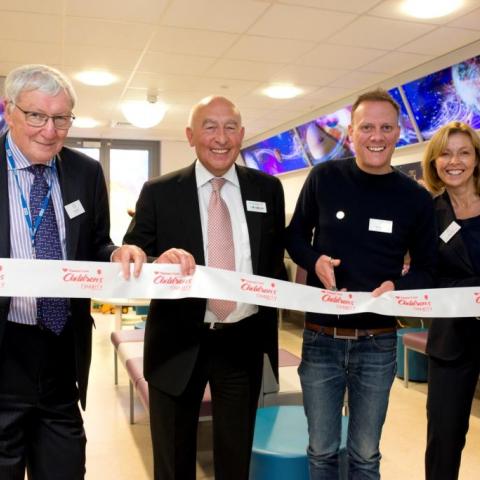