On 13th September Nick will travel to Newcastle to take part in the world’s leading half marathon, donning the lime green running vest of the charity. The Professor from Hale, Cheshire, is no stranger to the run having completed it twice before as well as also completing the Manchester Marathon in April this year. The keen runner is hoping to complete the 13.1 mile course in less than 90 minutes.

Led by Nick, the children’s Clinical Research Facility (CRF) undertakes pioneering research to turn medical advances into new life-saving drugs and treatments to deliver improved and effective care for children of all ages.

The children’s CRF is a state-of-the-art in-patient research facility where children’s care takes place hand-in-hand with clinical research.  The unit opened in 2009 and as well as being the first in the North West, is one of only a small number across the UK.

In 2014 the Charity fundraised to double the unit’s capacity so that it could provide a better environment for the patients who volunteer to take part in research. This means the children’s CRF can now undertake more studies into conditions and illnesses such as autism and childhood deafness, benefitting children in the North West and beyond.

All sponsorship Nick raises will go towards helping to continue to save young lives and shaping the futures of children.

“Running is a great passion of mine, so I am delighted to be able to help fundraise and raise awareness for the children’s CRF whilst taking part in the Great North Run. In my role as both a Clinician and Medical Director of the unit, I’m reminded each day what a key role research plays in developing better treatments and diagnostics for our young patients. The money I raise will go directly into helping the children’s CRF facilitate new clinical studies, as well as transforming areas of our unit into a relaxing and calm environment for our patients and their families.”

“We are thrilled that Nick will once again be representing the children’s CRF at the Great North Run.  He is a real credit to the hospital, going above and beyond to support the facility he leads. The research undertaken there is vitally important to the futures of the young patients cared for on the unit. The Charity works hard to support research projects to improve our understanding of children’s illnesses to benefit patients now and for generations to come.” 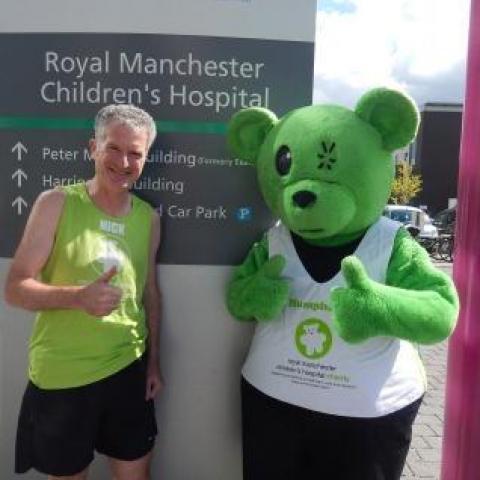