A Poynton High School pupil and his friends have raised nearly £5,000 for the hospital at which he receives treatment.

14-year old Ben Johns is a regular visitor to Royal Manchester Children’s Hospital where he has been receiving treatment for Crohn’s disease since 2011. Wishing to express his gratitude to the hospital and its staff for their ongoing care, Ben began fundraising for his ward two years ago.

Most recently, Ben and ten of his school friends completed a ‘Marathon Triathlon’ at Poynton Leisure Centre. With distances shared out amongst the team members they completed a five mile swim, a 13 mile cycle and an 8.2 mile run, which cumulatively add up to the 26.2 miles of a traditional marathon course. The team completed the challenge in under four hours, raising over £2,300 in the process.

“We are so grateful to Ben and his classmates for their fantastic fundraising efforts. This is the third event which Ben has organised on our behalf and each one has been a great success, raising thousands of pounds to help other poorly youngsters from across the region who attend the hospital for treatment.”

Commenting on his fundraising, Ben said:

“I have been attending the Children’s Hospital regularly over the past couple of years and am always looked after really well by the doctors and nurses on Ward 76 so I wanted to give something back to them to say thank you.

“I’m really lucky to have a group of friends who are so willing to help me in my fundraising and would like to thank them, along with Poynton Leisure Centre, for all of their support. I hope to do many more fundraising events in future.” 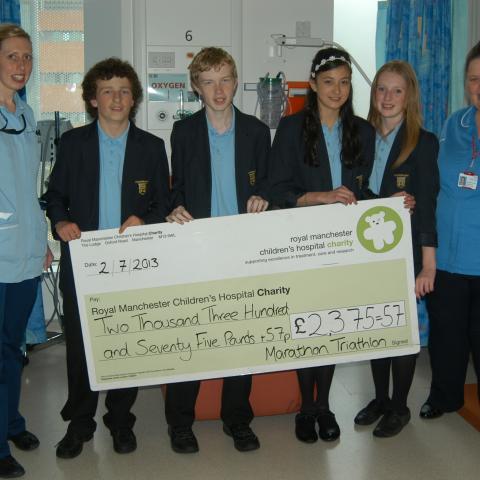