A DAD-of-two will spend 15 days trekking Everest – scaling heights of more than 18,100ft – to raise money for a Manchester children’s charity.

Michael Tipper will be climbing where oxygen levels are 50% lower than normal, risking altitude sickness, dizziness and fatigue, all to raise money for Royal Manchester Children’s Hospital Charity.

Michael, from Stockport, is the first to admit the challenge had been on his bucket list for a while but only became a reality when he found himself booking flights in the pub one Friday night.

“It was one of those ‘one day I’ll do it’ things until I got talking to someone who wanted to do it too,” explained Michael. “Then we met in a pub to a discuss it and before I knew it we’d booked the flights and it was really happening. I hadn’t had a drink until that point, only lemonade, but I needed one once I realised it was now real.”

Michael, 34, is no stranger to danger or endurance – during his Army days he fought in the Iraq war and has run up famous UK peaks including Snowdon and Ben Nevis.

“I was in the Army for seven years and did six months in Iraq at the beginning of the war – after that, nothing can be scary in comparison,” said Michael, who now works as a postman.

“When I came home from Iraq I felt invincible. When you go through something as horrendous as that, you really appreciate that normal life really isn’t that bad at all.

“Since leaving the Army I’ve tried to keep fit and healthy and I’ve done things like the Snowdon Half Marathon and run up Ben Nevis – I like a challenge.”

Michael is dad to 11-year-old Kodie and Ruby, aged eight. The choice of which charity to do the event for was simple – Royal Manchester Children’s Hospital Charity. Our charity enables the hospital to provide additional resources that make life easier for patients and their families who use the hospital.

We have three main areas of work:

Michael says he was inspired to fundraise for the charity after hearing about a friend’s daughter, PixieBelle Sykes, who began treatment for a brain tumour in July 2018. Six-year-old PixieBelle, from Ashton-under-Lyne, suffers from a rare form of brain tumour known as pilocytic astrocytoma.

“I sometimes go running with PixieBelle’s dad Andy and heard about what had happened to her and what the family had been through,” said Michael. “It was heart-breaking to hear he was going through that with his little girl.

“Having two girls of my own I can’t imagine what it must be like having a child in hospital. Anything to do with children or animals is just heart-breaking to me, and I live near Manchester too, so it was obvious it had to be for Royal Manchester Children’s Hospital Charity.”

Everest has been the subject of much debate recently and in headlines after a photo of the queue to the top was released and went viral. It was also reported last month (July 2019) that there had been 11 deaths on Everest this year alone.

“I know Everest has been in the news a lot but it tends to be more at the summit, while I’ll be going to base camp,” said Michael. “It will still be a massive challenge though – 15 days of walking up to 8-9 hours a day and reaching heights were the oxygen is 50% less than at sea level.

“I know there is a chance of altitude sickness and one of the days is an ‘acclimatising day’ which will be hard to adjust to. I’m hoping that doesn’t affect me. I’m quite healthy. I’ll just prepare as much as I can in advance.”

Michael has set up a JustGiving Page and will be taking on the challenge on 1st March 2020. He hopes to raise at least £3,000 from his challenge.

The charity’s Senior Events Manager Viv Williamson said: “Michael is taking on a mammoth challenge which will be a real test both mentally and physically.

“We’re so in awe of his decision to do this and we will be supporting him with fundraising ideas as he hopes to raise at least £3,000 for our charity. We can’t wait to see how he gets on.” 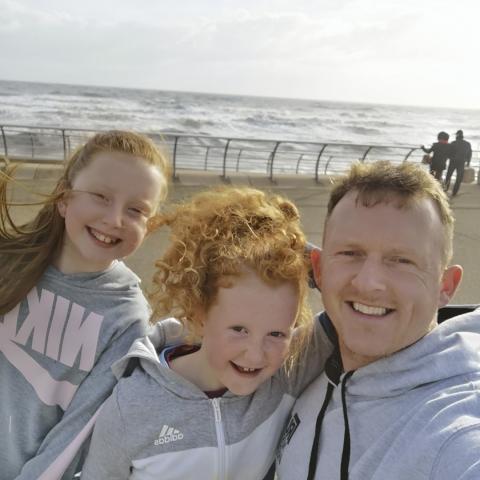