The news comes almost a year after the Group announced it was doubling its £1 million charity pledge to £2 million.

Peninsula Group announced its original commitment of £1 million in March 2019, but in light of the Covid-19 pandemic, which made the work of the hospital more challenging than ever, as well as impacting on charitable donations, Peninsula decided to double its pledge to £2 million.

During the past two years, Peninsula Group has built up a strong relationship with Royal Manchester Children's Hospital Charity, and employees have already raised this significant amount through ambitious fundraising activities such as the Great Manchester Run, abseiling a 200ft building and even a trek up Mount Kilimanjaro. Funds have also been raised through payroll deductions which have been matched pound for pound in corporate donations.

Royal Manchester Children's Hospital treats more than 280,000 patients every year and provides resources to make a difficult time easier for children and their families.

Peter Done, founder and Group Managing Director of Peninsula Group, said: "Peninsula Group are delighted to have reached the remarkable milestone of raising £1 million through our incredible fundraising efforts and the Group matching every donation made. We hope that this impressive donation will help Royal Manchester Children's Hospital Charity significantly.

"Even though we are halfway there, we will not be resting on our laurels, and we will be doing all we can to achieve our pledge of £2 million. With lockdown restrictions finally easing, we have some exciting adrenaline events taking place over the next few months.

"Royal Manchester Children's Hospital is an incredible organisation, and we are glad to assist, and it is a privilege to do what we can to help."

Rachel Laycock, Senior Corporate Fundraising Manager for the Charity, said: “We were delighted when Peninsula announced they wanted to raise £1million for us – when they doubled it to £2million we were overwhelmed at their generosity!

“Reaching the halfway mark is an event worthy of celebration and we want to thank each and every team member at Peninsula Group who has taken part in an event for us. They had some pretty impressive superhero costumes at our Humphrey’s Heroes Abseil and we’ve loved seeing the pictures of fundraising they did in-house too.

“We can’t wait to see them all in person, hopefully very soon. But in the meantime, I want to extend a virtual congratulations to everyone on reaching a terrific fundraising amount. Thank you Peninsula Group!” 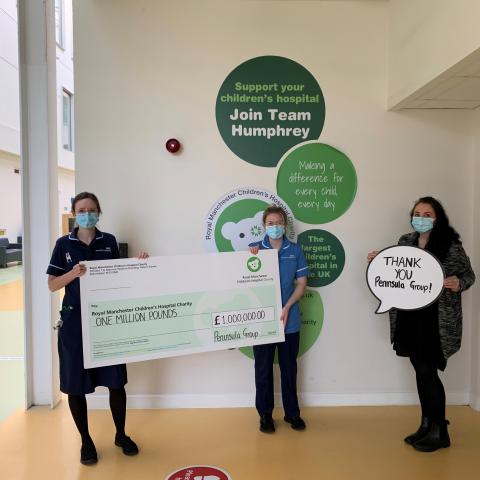