On Sunday 10th May Paul Partington has some very big (green and furry) boots to fill as he completes his most challenging run to date. Paul will be taking to the streets of Manchester at the Morrison’s Great Manchester Run dressed as our mascot, Humphrey.

Paul from Davyhulme, Manchester, is donning the bear suit to raise vital funds for the hospital which treated his young nephew for spinal surgery in 2014. Paul’s love of running goes hand in hand with his passion for raising money for charity having run for a variety of local charities since 2010.

“My nephew Michael underwent major spinal surgery at Royal Manchester Children’s Hospital and my brother couldn’t speak highly enough of the team at the hospital for the care that they gave him. I guess you could say that running as Humphrey this is a small way to say thank you.”

“In addition to this, I have recently been humbled after watching ‘The Kids Hospital at Christmas’, the television documentary about the hospital. The unthinkable situations some of the patients and their families find themselves in are unbelievable. The way they cope is a lesson to us all, but it wouldn’t be possible without the expertise and compassion of the people who work at the hospital.”

To run as Humphrey is a challenge that many fundraisers have undertaken over the years, bravely running 10 kilometres without the comfort of the usual running attire. To prepare himself for the day Paul recently completed the Wilmslow Half Marathon in 1:25:19. He is also taking part in the London Marathon on Sunday 26th April. He will be using his place in the world famous marathon to raise additional funds to help him hit his £2,500 target.

So far Paul has done many different things to help reach his goal, including arranging a cake sale, asking friends and family for sponsorship and introducing a swear jar at work! Manchester music legend and XFM presenter Clint Boon has also created a very special piece of artwork for Paul to auction in aid of the children’s hospital. Paul says that another reason he wanted to run as Humphrey is because he was incredibly moved by Clint’s own experience of the hospital. Clint’s daughter, Luna Bliss, sadly passed away in the Newborn Intensive Care Unit at sister hospital, Saint Mary’s.

Clint, whose followers are known as ‘The Boon Army’ is heading up his own team of runners at this year’s run. The ‘GMR Boon Army’ will be raising money for RMCH Charity as well as for Saint Marys.

“I recall watching an interview with Clint regarding his daughter and how the hospital looked after her before she unfortunately passed away. I want to run as Humphrey for people like Clint, for my brother and my nephew, the nurses who turn up each day and smile, the surgeons that display an amazing talent on a daily basis, for all of the staff for all of the patients, past, present and future. Six miles in a sauna suit is a small gesture in comparison to what these guys do but it’s something I can do to help them. I am honoured to have been chosen to represent the charity and run my home town event, dressed as their mascot.”

“When we received Paul’s application to run as Humphrey we were balled over by his enthusiasm for the Charity, we’re privileged to have such a kind-hearted individual running for us in this year’s Morrisons Great Manchester Run.  Paul is the perfect person to represent the charity as Humphrey at this year’s run; we just hope the weather isn’t as hot as last year! ”

Clint’s artwork is being auctioned on EBay. Bidding finishes on Sunday 19th April at 8pm - http://www.ebay.co.uk/itm/Clint-Boon-Inspiral-Carpets-XFM-Orignal-Art-Cow-Canvas-/251911531167

If you would like to run for RMCH Charity at this year’s Great Manchester run please visit http://www.greatrun.org/great-manchester-run  and tick the box to run for the charity. 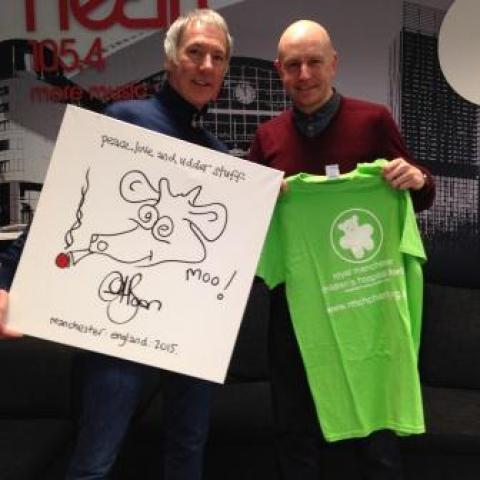