A family of fundraisers are celebrating the successful funding of a key therapeutic play project for Royal Manchester Children’s Hospital Charity.

Raising money under the banner ‘A Smile for Orly’, Rebecca and Lee Feddy launched their fundraising campaign in memory of their 18-month old daughter Orly, who died in her sleep in December 2012.

Inspired by the little girl’s bright smile and happy disposition, her bereaved parents embarked upon a fundraising campaign designed to both help and bring happiness to other children.

By galvanising a team of nearly 200 family and friends to take part in last May’s Greater Manchester Run, an annual 10km road race which takes place on the streets of Manchester, ‘A Smile for Orly’ raised tens of thousands of pounds within weeks of launching.

Now a portion of that money has been used to fund the year-long placement of the Manchester Magic Medics at Royal Manchester Children’s Hospital, two children’s entertainers who help to entertain, distract and bring a smile to the face of young patients.

The pair, known as Barrington and Louby Lou, were present at today’s celebration event, held in the Teen Zone at the Children’s Hospital. Alongside Peter Mount, the Chairman of Central Manchester Hospital’s Trust, family and friends of the Feddys were joined by young patients from the hospital as well as a group of youngsters from Orly’s nursery class. The Manchester Magic Medics wowed their young crowd with magic tricks, sing-alongs and games.

“To suffer the loss of a child is a tragedy no parent should ever have to face and our deepest sympathies are with Rebecca and Lee. To have taken such a terrible experience and to create something so meaningful and which will bring such joy to so many others

Today’s event coincides with the 50th anniversary of therapeutic play being introduced into hospitals. Long recognised for the vital role they play in helping young patients adjust to the experience of being in hospital and in their subsequent recovery, Play Specialists help youngsters to overcome fear or distress when receiving treatment and provide a much needed support to parents by entertaining children frustrated by their time on the ward. 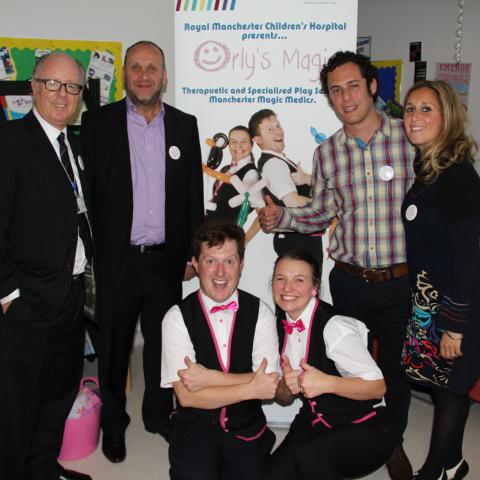