On Be Seen in Green Day last year, Josh Cubbin was a patient on Ward 84, attached to a drip and not very well. Fast forward a year, Josh is now a happy and healthy 4 year old running around his home in Wigan – there couldn’t be more of a change.

Josh was diagnosed with Burkitts Lymphoma on 22nd April 2014; for the next three months Josh’s home was Ward 84, the regional centre for the treatment of childhood cancer at Royal Manchester Children’s Hospital. It was here where he received a visit from Hollyoaks star, Ashley Taylor Dawson on Be Seen in Green day last year.

Be Seen in Green, kindly supported by Ryman, on Friday 3rd July is the flagship fundraising day for Royal Manchester Children’s Hospital Charity (RMCH Charity) which asks supporters to wear green and to make a suggested donation of £1. Like last year, all funds raised will help to secure the final £20,000 needed to fund the redevelopment of Ward 84, making it a much more colourful and engaging environment for patients, crucial factors in the psychological well-being and recovery of those being treated.

“We would like to ask everyone to 'Be Seen in Green' on the 3rd July.  It is something so simple yet so effective at raising awareness and of course valuable money for Ward 84.  I can't believe that this time last year our little boy was still fighting the monster that is cancer. He has come a long way and we are so proud of our little superhero.  Ward 84 will be part of our lives for many years to come and the ward and RMCH will always hold a special place in our hearts forever.”

“I can't tell you how incredible it was seeing everyone wearing green last year and supporting this wonderful cause, it meant so much to us and all the other families on Ward 84.  It would mean the world again to us, other families and the hospital to see everyone in green again. We of course will be getting our green on, as will our family, friends and colleagues and we would absolutely encourage everyone to – it really will make a difference.”

Last year Handelsbanken, the bank where Josh’s dad, Ian, works turned green for the day. They threw all of their efforts into raising as much as possible for the ward where Josh was a patient. This year Ian encourages businesses of all sizes to join in the fun, raising money for such a vital cause, one he knows only too well.

As well as businesses, Be Seen in Green is open to schools, nurseries, social groups or even just groups of friends and it is really easy to take part, those interested can register through the charity’s website.

“Josh is a fantastic little boy and we’re delighted he is now in remission, however this time last year this was a very different story - Josh’s family experienced Ward 84 for weeks on end. With this year’s fundraising day we are looking to secure the final £20,000 needed to enhance the ward.

Dealing with such an illness can be very challenging but we want to make life a little easier for our patients by making their surroundings as engaging and comforting as possible.”

Royal Manchester Children’s Hospital Charity raises funds to ensure continued excellence in treatment, care and research at the hospital – improving the lives of thousands of children each year across the North West and beyond.

The support of the Charity means that the hospital can provide additional resources that make life easier for patients and their families who use the hospital. 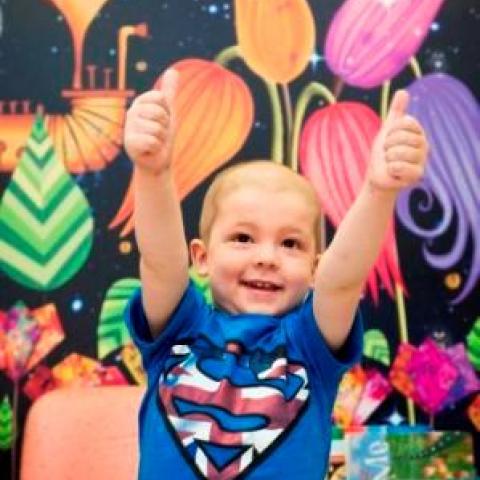