WHEN Oliver Geldard steps over the finish-line of Humphrey’s Lantern Walk, you’ll forgive his parents for shedding a few tears.

While he’ll be among many youngsters crossing the line and accepting their medals, for Oliver it’ll be a huge achievement – doing a park walk after spending the last year in a wheelchair.

Oliver’s life since October 2018 has been spent looking at the four walls of his room at Royal Manchester Children’s Hospital – only occasionally leaving for appointments, hospital school and to get a spot of fresh air in the hospital’s garden.

But next week he’ll be undergoing surgery on his spine which will hopefully see him living back home and running about like any other eight-year-old at Humphrey's Lantern Walk – a charity event at Heaton Park to raise money for our Charity.

“To be able to see him out of his wheelchair and doing the stuff he enjoys will be just amazing,” said Oliver’s mum Nicola, 42.

“Humphrey’s Lantern Walk has a 2K and a 4K route but I think Oliver might just try the 2K route – even that will be a big challenge for someone who hasn’t had a lot of practice at walking this last year.

“I can’t wait to see him doing it. I think I’ll get quite emotional and be an embarrassing mum.”

Oliver, from Stockport, was diagnosed with severe kyphoscoliosis when he was eight months old. The condition means his spine is bent and deformed. Without procedures to correct his posture, his spine would have grown round in a curve and crushed his lungs and heart.

Over the years he has had a number of operations and hospital visits, spending time in plaster casts and braces. But this is his longest hospital stay to date – after being admitted in October 2018. During his time in the hospital he has been in a wheelchair wearing a traction weighted metal frame around his head – a contraption where weights can be added to pull his head up, lengthen his spine and prepare him for surgery.

On Tuesday, 10th September, leading spinal surgeons at the children’s hospital will insert rods into Oliver’s spine to straighten his back.

“He’ll instantly grow a few inches taller, which will take some getting used to,” said Nicola.

“The whole process of being in the wheelchair with the weights has been leading up to this surgery – so we’ve been on countdown for a long time.”

The operation will be a huge step in Oliver’s treatment –once the rods are inserted they will be lengthened every six months, so as Oliver starts adolescence and grows, the rods can be adjusted accordingly and his spine can straighten out. It’ll not only treat his posture, it’ll buy him decades of life, extending his estimated life span from 30-40 years to about 60-70 years.

If all goes well, Oliver will need approximately nine days to recover from the surgery, before he is allowed home to spend time with mum Nicola, dad Chris, 43, and little sister Maisie, six. But Nicola is hoping it could be sooner.

She said: “We’ve celebrated Mother’s Day, Oliver’s birthday and other big occasions in the hospital but I’m determined he’ll be celebrating my birthday, which is 19th September, at home with a big family party.

“The staff at Royal Manchester Children’s Hospital are just incredible, we can’t thank them enough, hence why we’re doing the walk as a thank you for all their help. But it will be great to get him home – we can’t wait.”

Oliver’s excitement for Humphrey’s Lantern Walk was evident when he met Humphrey Bear, the charity’s mascot, and children’s TV presenter Olivia Birchenough, who will be starting the walk on Saturday, 16th November. The trio posed for photographs to help officially launch Humphrey’s Lantern Walk and encourage families to sign up.

Olivia, who presents Channel 5’s Milkshake!, said: “Meeting Oliver was so inspiring – he’s obviously full of energy, as any little boy would be, and loved showing me his room full of Liverpool FC posters.

“The next time I see him will be at the walk, so he’ll be out of his wheelchair – I can’t wait to see how he gets on, running around with his friends.

“Humphrey’s Lantern Walk sounds like such a fun event. I can’t wait to be part of it.”

Registration for the walk is just £5 per child. There will be accessible routes, a choice of a 2K or 4K course, and an autism-friendly start line available. Registration includes a goody bag and twinkling lantern. Anyone who registers before 30th September will also receive a free pair of Humphrey Bear ears to wear (as pictured on Olivia).

Everyone taking part is asked to try to raise a minimum of £30 in sponsorship for Royal Manchester Children’s Hospital Charity.

The charity’s Senior Community Fundraising Officer Donna O’Reilly said: “This year we’re celebrating our 10th birthday so there is no better time to join in Humphrey’s Lantern Walk.

“We see families coming back year after year to do the walk and it’s a lovely fun event – lots of children enjoy holding their twinkling lanterns and seeing them light up the tunnel.

“We’d love to make this our biggest event yet, so I’d encourage families to sign up now and do something amazing for charity.” 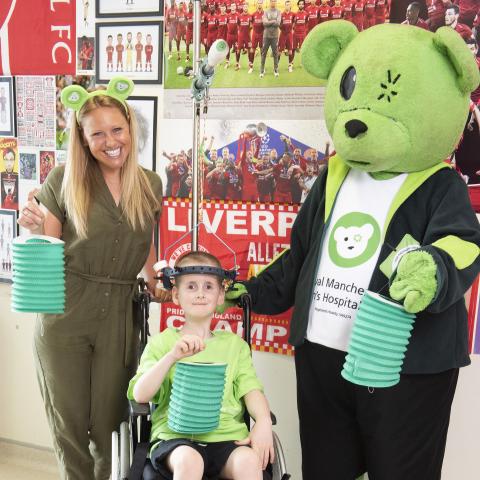