Eight year old Noah Reah from Swinton has taken the dip of a lifetime by taking a bath in baked beans to raise money for Royal Manchester Children’s Hospital.

Noah suffers from a very rare condition known as Chiari Brain Malformation which affects his balance and fine motor skills and so spends a lot of time at the hospital. After having countless MRI scans Noah decided it was time to raise money and has now raised over £2,000 to help purchase specialist mobile MRI scanners.

As part of his condition Noah suffers from excruciating headaches. Over the past few years Mum, Johanne, and Dad, Ian, have spent hundreds of pounds on soothing music to aid the pain. Disappointingly the CDs weren’t working, however one day purely by chance Noah discovered that no other than Bob Marley did the trick!

The idea of fundraising initially came from Noah saying he would raise the pounds to buy one of his CDs to be played in the scanner. The scanners are noisy and uncomfortable and music helps to distract patients. From there the idea has grown and on 25th July Noah took a bath in a tub full of baked beans in front of a crowd of family and friends.

The initial plan was to stay in the bath of beans for four songs (of course including Bob Marley) however on entering the tub Noah was not impressed by how cold the beans were. After being willed on by the crowd he lasted an impressive 4 minutes before jumping out and splattering the crowd!

The staggering 275 tins of beans were donated by many family, friends and neighbours and ‘Laines for Drains’ even kindly came out to clear the beans away the next day. As well as Noah’s bean-themed challenge the family also held a family fun day complete with bouncy castle, raffle and cake sale. Noah also sold wristbands to raise awareness of his condition, Chiari Brain Malformation. Over £900 was collected just on the day with more money on Noah’s Justgiving fundraising page.

Brave Noah will go under the surgeon’s knife later this month to relieve pressure on his spinal cord, no doubt Bob Marley’s hits playing a part in his recovery.

“It was great seeing Noah take the plunge, he is such an inspiring young boy and there was a fantastic atmosphere at the bean bath, everyone was in such high spirits cheering Noah on. We think it is great that it was his love for Bob Marley and wanting to provide music for those having scans that spurred him on to raise such an amazing amount of money.

We are truly grateful for his efforts, especially facing a bath of cold slimy beans, as well as those of every single person who donated and helped in some way. Its people like this 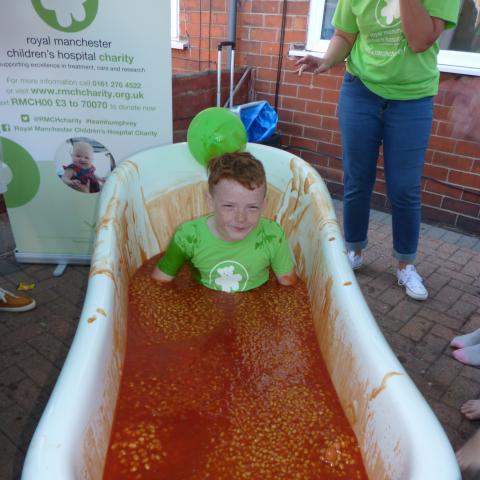