All money raised from the two runs, taking place on 9th May at Heaton Park, will fund the creation of a brand new playroom at the North West’s regional centre for children and young people with cancer.

A fundraising target of £20,000 has been set to fund the playroom; enabling the installation of engaging ceiling and wall artworks, child-friendly furniture and storage as well as paying for toys for the room.  Staff on the ward work hard to keep spirits high and the new playroom will help to make this much easier, providing a welcome distraction from tiring treatments. It will also give children a chance to have fun and feel normal at some very hard times.

Charlotte in particular knows how important the playroom will be; in January 2014 she was diagnosed with a very rare form of Acute Myeloid Leukaemia undergoing three very strong courses of chemotherapy, followed by a bone marrow transplant in July last year.

“When I was first diagnosed I spent 18 weeks on Ward 84 without any breaks, as I was unable to go home or to see my friends because I was so ill. Now even though I am doing well, I still sometimes have long stays in hospital. Because I’ve spent so much time there, I know how scary and inspirational a children’s cancer ward can be and how important it is to have fun when you’re well enough to get out of your hospital bed.”

Charlotte is hoping to be well enough to join in the run but if not she will be there to cheer on the Charity’s Mini and Junior runners. Charlotte has already been raising money through her own challenges to help transform Ward 84 to help reflect the courage and spirit of all the patients.

The Mini Run is 2km long and is suitable for children 3-8 years old. The Junior Run is the further distance of 2 miles and for children 9-15 years old.

Also donning her running shoes will be Ward Manager Helen who will be taking part in the runs’ adult equivalent, the Great Manchester Run, the day after on the 10th May.

Helen started caring for children with cancer on Borchardt Ward at Pendlebury Hospital in 1997. Five years ago when the hospital moved to the new site, and became Royal Manchester Children’s Hospital, Helen became the Ward Manager of Ward 84.

By her own admission the mum of three from Glossop hasn’t ran for many years but is training hard to raise vital funds for the ward which treats over 120 new cases of cancer in children every year. Also joining Helen will be Ward Sister, Claire Bentley.

“The environment in which these children are cared for is crucial for their psychological well-being as well as their comfort and happiness during long or repeated admissions. Children remain on treatment from between 6 months to 3 years at a time. When they’re well enough it is important that they get the chance to be children, a dedicated and fully equipped playroom will really help to enable this”

“This year, Royal Manchester Children’s Hospital is the nominated charity for the Junior and Mini Great Manchester Run. We are hoping for a record number of children to join us to help us raise money for those children who are too poorly to take part.”

For more information about the adult run and to sign up for RMCH Charity visit http://www.greatrun.org/great-manchester-run and select the charity from the drop-down selection. 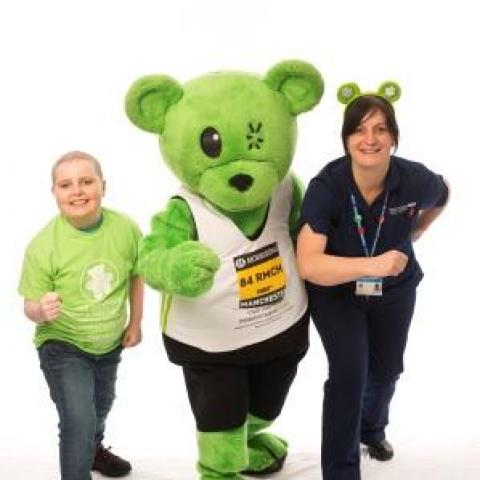