We are delighted to announce that Manchester’s very own Michelle Keegan has joined Team Humphrey and is our newest Charity patron.

The former Coronation Street star first got involved with the hospital in 2013 when she fronted RMCH Charity’s Big T-Break campaign. Michelle has now pledged her support to the charity by becoming an official patron, taking time out of her busy schedule to meet with patients at the hospital.

Michelle will now be helping to raise awareness of the charity and lending a hand with fundraising so that the charity can continue to support excellence in treatment, research and care and help to make a difference to the 200,000 children who visit the hospital each year.

The multi award winning actress, well-known for her role as Tina McIntyre in Coronation Street, has recently launched her third collection for fashion label, Lipsy, which she has been working hard on since leaving the infamous cobbles in May. Michelle is currently in Manchester filming her first role since leaving Coronation Street, BBC drama, Ordinary Lies, where she will play receptionist, Tracey.

Michelle, who splits her time between Manchester and Essex, where she now lives with her fiancé, Mark Wright said:

“I am really excited and honoured to become an official patron for Royal Manchester Children's Hospital Charity. Being born and bred in this city, I know the excellent work the hospital does and couldn't think of a better local charity to support than RMCH Charity.”

“Having visited the hospital myself, I have seen first-hand the difference that the Charity makes to the patients.  Charitable funds ensure that the hospital environment is as child-friendly and as comforting as possible. They also support vital clinical research and provide state of the art equipment for diagnosis and treatment.”

“I really enjoyed visiting the hospital again and meeting the inspirational staff and patients.  Now that I am an official patron I will be encouraging the people of the North-West to join me in supporting the Charity to help ensure that Royal Manchester Children’s Hospital is not only the biggest in the UK, but also one of the very best!”

“We are delighted that Michelle has pledged her support to Royal Manchester Children’s Hospital Charity and I know she will be a fantastic patron.   The support of patrons like Michelle is vitally important for the hospital and Charity.  In addition to helping with our fundraising, visits from patrons make a huge difference to our patients and their families.  We’re so pleased to welcome Michelle and look forward to working with her more.” 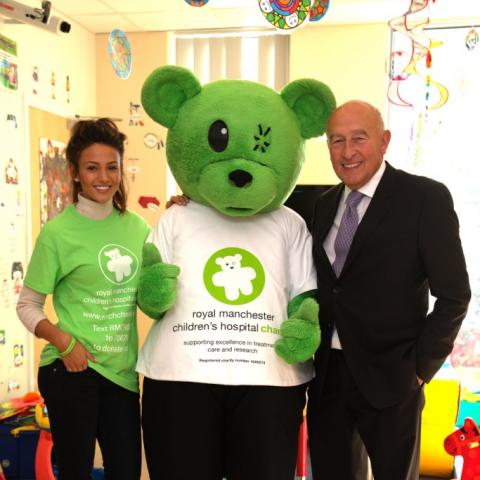