27-year-old Michael Joyce from Blackley, North Manchester will be taking on this year’s Great Manchester Run to celebrate 20 years since he received a life-saving bone marrow transplant at Royal Manchester Children’s Hospital. He’s pledged to take on the 10k distance on Sunday 20th May as a way to say thank you to the hospital which saved his life.

It was 1st May 1993, when Michael was just three-years-old when he was diagnosed with Acute Lymphoblastic Leukaemia, a cancer that affects the white blood cells. He underwent chemotherapy treatment at Royal Manchester Children’s Hospital’s former site in Pendlebury and after 12 months his parents were delighted when they were told that he was in remission. Sadly, just three years later when Michael was six-years-old, he was given the devastating news that he had relapsed and the cancer returned.

Michael was once again admitted to Royal Manchester Children’s Hospital and underwent intensive courses of chemotherapy and radiation treatment but was told he would need to undergo a Bone Marrow Transplant to help him fight the disease.

None of Michael’s immediate family where a match for the transplant, so as a last resort, Michael underwent an autologous transplant when he was eight-years-old.  This meant that stem cells were removed from Michael’s bone marrow, then following high-dose chemotherapy or radiation treatments, the stem cells were put back into Michael’s body to make normal blood cells.

Michael was admitted to the Bone Marrow Transplant Unit and due to the risk of infection, had to remain in isolation throughout his treatment.  Normally on BMTU a child’s parents are allowed to be with them but other visitors are asked to stay away, so as not to compromise the transplant.  Michael spent three months in isolation following his transplant, which thankfully was a success.

Michael comments: “I’ll forever be grateful to the incredible staff at the Children’s Hospital for everything they did for me. The hospital saved my life, so with the anniversary of my bone marrow transplant approaching next month I wanted to do something to show my gratitude. Nothing I do will ever be able to repay them for giving me a second chance at life, but I wanted to take part in the run to say thank you. I’m not a very sporty person, so running 10k will be a big challenge for me. I’ve already started training as I want to do the best I can on the day.”

Michael, who is currently working as a mental health support worker still has yearly check-ups and has regular testosterone injections every 10 weeks as his hormone levels were affected by the radiation treatment he received.

Jessica Ruth, Events Manager at Royal Manchester Children’s Hospital Charity comments: “We’re thrilled that Michael has signed up to take on this year’s Great Manchester Run in support of our Children’s Hospital. It’s a great way to mark his anniversary, with all money raised going towards the Bone Marrow Transplant Unit at the hospital. We want to get as many runners as possible on the day so hope Michael’s inspirational story will inspire others to run this year in support of our hospital.”

To sponsor Michael in his fundraising challenge please visit: www.justgiving.com/fundraising/michael-joyce4

To join Michael and take on the Great Manchester Run in support of Royal Manchester Children’s Hospital visit www.rmchcharity.org.uk/events/great-manchester-run-2018 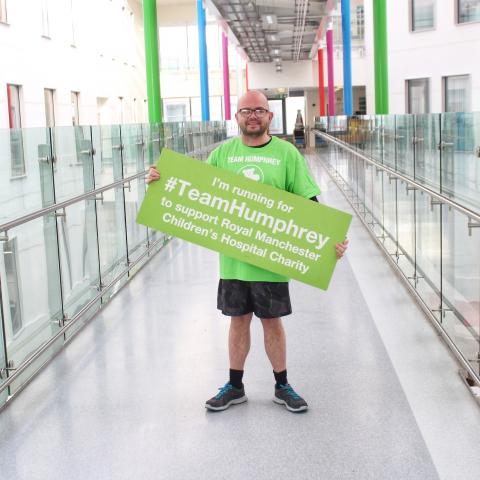