NOT all heroes wear capes….some wear a navy blue uniform and walk the corridors of a children’s hospital.

Claire Holden is a specialist nurse practitioner at Royal Manchester Children’s Hospital, but to eight-year-old spinal patient Oliver Geldard she is also a superhero.

Claire is one of the stars of this year’s Royal Manchester Children’s Hospital Charity video, which urges people to support the charity and sign up for the Simplyhealth Great Manchester Run.

The video shows Oliver drawing a picture of his ideal superhero, which morphs into Claire doing some stretches before setting off on a run.

Oliver asked his spinal nurse Claire to run the event’s 10K in his honour, as the pair have known each other since Oliver was just a baby.

“Oliver has always been absolutely amazing – he has been through an incredible amount for an eight-year-old, both physically but also psychologically,” said Claire.
“He has faced lots of challenges in his life, but he is always very resilient, and it’s very humbling to see.”

Oliver, from Stockport, has had numerous surgeries and procedures on his spine to treat severe kyphoscoliosis, a deformity of the spine which has required him to wear a traction weighted metal frame for several months. He’s been in and out of hospital all his life. His latest visit started in October 2018 and will end when he has undergone surgery to insert rods to help straighten his back.

Claire said: “Oliver and so many of our patients are inspirational, so whenever I don’t feel like running or I’m struggling to go out in the cold, I just think of what all our patients have been through and how they must be feeling.”

Inspired by her son, and Claire’s sign up, Oliver’s mum Nicola has now joined the run with a team of family and friends, including her husband, mother-in-law and daughter.
“I think it’ll be a bit of running and a bit of walking for me,” she said. “I’ve never done anything like this before so it will definitely be a challenge. But this is the longest time Oliver has spent in hospital, so I can’t complain about 10K can I?”

The Geldard family hope Oliver will be well enough to join them on the last 1 or 2K in his wheelchair, so they can cross the finish line together.

Oliver, an avid Liverpool FC fan whose hospital room is decorated with football memorabilia, said: “I think dad will be the fastest.”

More than 280 staff from across Manchester University NHS Foundation Trust will be taking part in this year’s event, as part of the organisation’s Blue Wave team.

Sarah Naismith, Director of Royal Manchester Children’s Hospital Charity, said: “We’re incredibly lucky that so many of our staff feel moved to run in honour of their patients. Oliver acting as an inspiration is sure to spur Claire on. We wish her the best of luck in her training and for the 10K itself.”

To sponsor Claire and the Geldard family visit their JustGiving page. 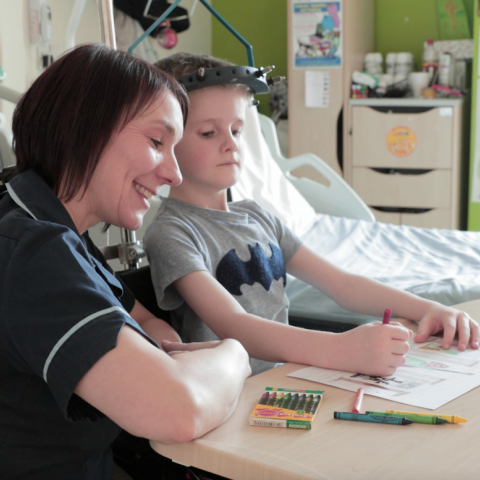