The state-of-the-art unit projects a series of interactive 3D images and games on to a screen which patients can control and enjoy whilst they undergo medical treatment. Wearing special 3D glasses, youngsters become completely immersed in a colourful world of virtual reality that helps distract them from pain and blocks out the frightening sights and sounds of the treatment room.

Six football mad fans, selected by the Royal Manchester Children’s Hospital Charity, were invited to help Fabian cut the ribbon and were then each presented with their very own Manchester City home kit to mark the occasion.
For one Blue who was too poorly to attend the unveiling, Fabian made a surprise visit to their ward to deliver their football kit in person.

Commenting on the visit, Fabian said; “Today I was blown away by the spirit and bravery of all the kids I’ve had the pleasure of meeting. To be able to give something back to our local community and support the great work of the Royal Manchester Children’s Hospital is a real honour for everyone at the club.”

Sarah Naismith, Director of Charites at Royal Manchester Children’s Hospital Charity added; “It was a real pleasure to welcome Fabian to our Children’s Hospital to meet some of our patients and to unveil the piece of specialist equipment which the squad very kindly funded.

“The 3D Pain Distraction Unit will be used to ease patients’ fears and take their minds off medical procedures which can be daunting for young children. We’re extremely grateful for all the support we receive from the club; they are always going above and beyond to think of our patients.”

The unveiling forms part of the Club’s long-standing relationship with the hospital. Earlier this season, patients joined the squad on their champions parade through Manchester city centre and seven brave youngsters were invited to take part in both the men’s and women’s official team photographs.

Royal Manchester Children’s Hospital Charity will be conducting a bucket collection at the Etihad Stadium on Saturday 2nd February 2019. 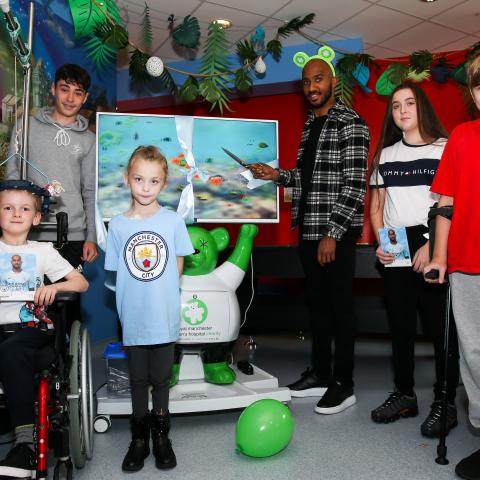