The double act visited the hospital’s Ward 84 patients to bring some festive cheer – spending time chatting to young patients, posing for selfies and singing songs. They started off the visit by joining in the patients’ party, before going bed to bed taking song requests – including High Hopes by Panic At the Disco and Cool by the Jonas Brothers – two of their most popular X Factor: Celebrity performances.

The 16-year-olds also made a kind donation of £3,000 to our Charity, which supports excellence in treatment, research and care for young patients.

Max said: “It was such a nice event to round off an amazing year for us.

“We loved singing songs for the patients and taking their requests - we had all sorts from High Hopes to one patient asking for Old MacDonald Had A Farm.”

Harvey said: “Seeing the children’s faces light up when we started singing was so nice.

“It can’t be great being in hospital over Christmas, but it was such a welcoming and warm atmosphere with people joining in and clapping along – we hope we made it a bit more bearable.”

The singers and YouTube sensations are big supporters of Royal Manchester Children’s Hospital Charity and have visited Ward 84 on a number of occasions. On a previous visit to the hospital, in summer, they filmed an episode of their CBBC show FOMO. Patients and former patients were invited to take part in the show and helped Max and Harvey make some pink and green slime.

The Charity’s Senior Community Fundraising Manager Angela Rowe, who organised the visit, said: “Max and Harvey always bring lots of energy and cheeriness and yesterday was no exception.

“It was great to see so many patients joining in the singing and asking for selfies with them.

“We’re so incredibly grateful to Max and Harvey for their continued support and generosity – it means the world to our Charity and all the young patients who enjoy their visits.” 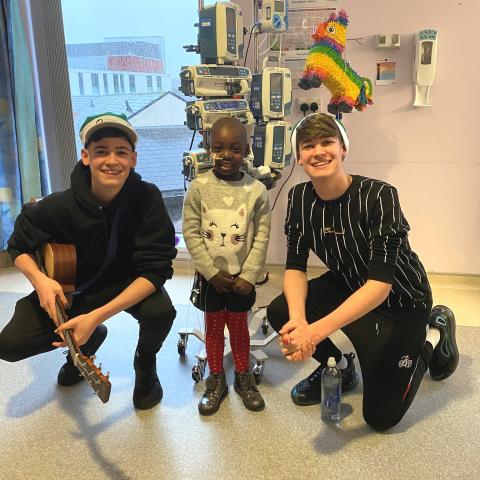