Youtube and Musical.ly duo Max and Harvey Mills are to be honorary starters at the Simplyhealth Junior and Mini Great Manchester Run.

The identical twins, from Berkshire, have amassed over 3.7 million fans on video social app Musical.ly, 10 million total views on Youtube and also have hundreds of thousands of followers on Twitter and Facebook.

Max and Harvey, who are 14 years-old, are the biggest Musers in Britain and shot to global fame in 2016 when they began to use the lip syncing app to record cover songs and videos.

They now have a mammoth social media following and released their co-written debut single ‘One More Day in Love’ in December.

The brothers will fire the starting gun on the North West’s biggest children’s running event when it takes place in Manchester city centre on Sunday 28 May.

They will also cheer on the young runners who are supporting Royal Manchester Children’s Hospital Charity, after becoming patrons when they saw the hospital’s amazing work first hand when a friend spent time there as a patient.

“We can’t wait to meet some of the runners, hear their inspirational stories and cheer them on as they take part on the day.

“The run is such an iconic event and we hope it gets all the participants pumped up and ready for the run!”

Harvey added:  “Max and I recently visited Royal Manchester Children’s Hospital and met some of the most strongest and courageous children.

“One of our friends was treated at the hospital, so we know first-hand what an incredible job the hospital does and why fundraising for the hospital is so important.

“That’s why we are dedicated to showing our support.”

Max and Harvey are currently filming a documentary worldwide with the BBC and have been nominated for ‘Muser of the Year’ at the 2017 Shorty Awards and their first book is coming out later this Autumn.

They will be performing in Manchester on Saturday May 27th as part of their #UpClose concert series with Hilton, at the Hilton Manchester Deansgate.

2,000 children of all abilities will take to the streets of Manchester in a brand new city centre location for the Simplyhealth Junior and Mini Great Manchester Run.

The event is perfect for kids between 3-15 years old, with Mini runners taking on a 1.5k course and Junior runners tackling the 2.5k course.

Sunday 28 May will be a day of running in Manchester for all ages, with everyone experiencing the amazing atmosphere the city has to offer.

Children whose parents and guardian are taking on the Simplyhealth Great Manchester Run are able to complete these events before the 10k starts.

“The boys are passionate supporters of our charity having visited the hospital, performed for our patients and fundraised for us!

“The event is always a very special day for us as we have lots of our hospital patients taking part - many of whom have faced countless obstacles from long-term illnesses.

“It’s so inspiring that after everything they have been through, they are committed to giving back and helping others.”

Find out about our discounted places in the mini and junior run. 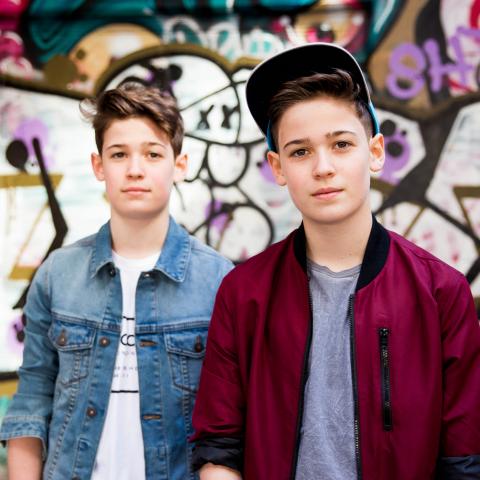