The duo, who are already avid supporters of the Charity, made the relationship official this week by agreeing to become Charity Patrons. They met with Charity mascot Humphrey who was happy to welcome them on board.

The new title means they will be featured on our Charity patron page and they agree to support Charity events and activities throughout the year. They join other famous names including John Thomson, Phil and Julie Neville and Antony Cotton.

Max and Harvey, who starred in last year’s The X Factor: Celebrity final, said: “We are excited and proud to have been asked to be patrons for the Royal Manchester Children’s Hospital Charity.

“We love going to visit them and have been raising money over the last few years for the Charity through selling personal video messages for our fans. The staff and kids we visit at the hospital are such an inspiration and we are honoured to become Charity Patrons.”

Yesterday (Wednesday, 19th February) the twins, aged 17, visited the hospital to film an episode of their CBBC programme FOMO with current patients and former patients who have supported Royal Manchester Children’s Hospital Charity.

After meeting with Humphrey – the Charity’s friendly green bear – for an official photograph, Max and Harvey visited Ward 84 of Royal Manchester Children’s Hospital to sing songs to some of the children. The ward holds a special place in their hearts and has been the inspiration behind their fundraising. At Christmas time, the brothers kindly donated £3,000 to support the Charity’s work to improve treatment, research and care for young patients at the hospital.

Their visit came after Max and Harvey performed a sold-out show at Manchester Club Academy on Tuesday night. They’re currently part-way through their tour and have three more shows in Glasgow, Newcastle and Bristol.

Sarah Naismith, Director of Royal Manchester Children’s Hospital Charity, said: “Max and Harvey have been fantastic supporters of ours over the years and so it felt right that they should have that dedication and devotion to our fantastic Charity officially recognised.

“They are always a huge hit with the children when they come to visit and we’re so proud to have them on board as Charity Patrons.

“We look forward to seeing them at the hospital again very soon!”

The support of Royal Manchester Children’s Hospital Charity means the hospital can provide additional resources that make life easier for patients and their families who use the hospital.
The Charity has three main areas of work:

To find more about how you can support our Charity visit our "Get Involved" Page. 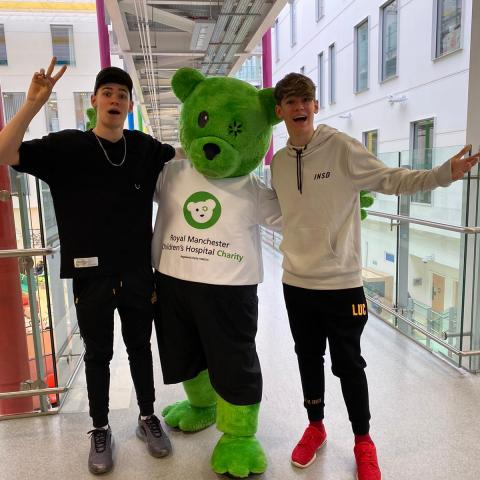