Royal Manchester Children’s Hospital Charity has been painting the town green in preparation for this year’s Be Seen in Green fundraising day on Friday 1st July, sponsored by Ryman Stationery.

Manchester Town Hall was lit up green last night (Monday 20th June) to support the campaign, which invites schools, businesses, nurseries, social groups or even just groups of friends to wear an item of green clothing (the colour of the charity) in exchange for a suggested donation of £2 to Royal Manchester Children’s Hospital Charity.

This year the campaign will support the charity’s appeal to build a 24-hour access helipad at the hospital’s central Manchester site. Launched last September, the Helipad Appeal will allow the hospital Trust to save many more lives and increase the chances of a full or improved level of recovery in a great many seriously ill or injured patients. By taking part in Be Seen in Green participants will raise valuable funds towards the last push needed to reach the Helipad’s £3.9million target.

The campaign is being supported by The Lord Mayor of Manchester, Councillor Carl Austin-Behan who, with the charity’s mascot Humphrey Bear, was on hand to see the City Centre landmark bathed in green light.

The Lord Mayor of Manchester, Councillor Carl Austin-Behan commented:  “I’m delighted to be supporting Royal Manchester Children’s Hospital Charity’s Be Seen in Green Day, which is raising money towards the charity’s vital Helipad Appeal. Fundraising days like this highlight the reality that by joining together we can make a big difference to the most worthwhile causes, so I urge the people of Manchester to fully get behind the charity’s annual flagship fundraising day by wearing green on the 1st July. The Town Hall looks fantastic lit up in green, and it’s an honour to be involved with such a worthy local charity.” 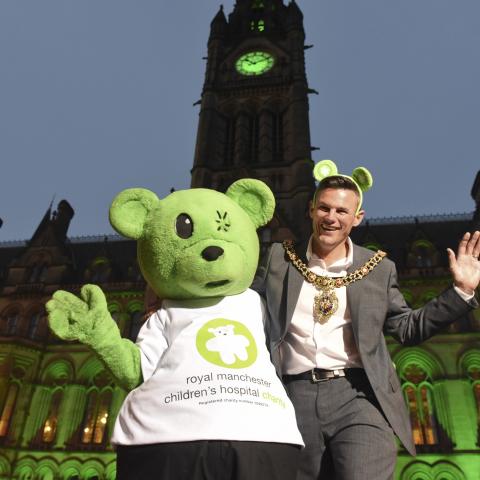