Intrepid staff from The Manchester Grammar School are taking on the 2016 Great Manchester Run to raise money to help save the lives of seriously ill or injured children.

Up to two dozen staff will take part in the gruelling 10km race through the streets of Manchester next weekend, in support of Royal Manchester Children’s Hospital Charity.

All the money raised by The Manchester Grammar School will go towards helping the Children’s Hospital – as part of Central Manchester University Hospitals NHS Foundation Trust – build a dedicated helipad on site at the Trust.

And today, 11 May, the Charity’s Mascot Humphrey dropped into the School to give the runners some final words of encouragement before next week’s race.

Using the strapline, ‘Time Saves Lives’, the Helipad Appeal will enable the creation of a brand-new, 24-hour access, primary helicopter landing site, the first of its kind in central Manchester. This will allow the Hospital to save many more lives and will increase the chances of a full or improved level of recovery in a great many seriously ill or injured children.

Currently, Royal Manchester Children’s Hospital, along with the other hospitals, relies upon a secondary landing site in a nearby park, an arrangement which means that patients initially transported by air ambulance must then be transferred the final mile of their journey by land ambulance. This second transfer, often undertaken on muddy or uneven ground, significantly adds to the risk of complication, particularly in children, due to additional handling of the patient. A secondary transfer also adds precious minutes to the overall transfer time with every moment’s delay greatly increasing the risk to life.

The appeal was launched last year by Chairman of Central Manchester Foundation Trust’s Charitable Fundraising Board, Maurice Watkins CBE, who is also Chair of Governors at The Manchester Grammar School.

“Building a helipad will save precious minutes when a child is seriously ill or injured, and those minutes could help save that child’s life. The staff at Royal Manchester Children’s Hospital do an absolutely fantastic job caring for poorly or injured children, and the helipad will make a huge difference to their ability to save lives.

“If a child was to suffer a suffer a critical injury or fall seriously ill, we would all want a service that could save that child’s life so I would ask that people please sponsor our runners through our JustGiving page. Every donation made will help towards our goal of building the helipad and saving lives.”

“We’re thrilled that such a large number of staff from The Manchester Grammar School have chosen to take on the Great Manchester Run in support of our Children’s Hospital. The school has kindly supported our charity at other events over the years so we are very grateful to once again have their support. The run is always a fantastic day with such a great atmosphere and I’m looking forward to seeing the team don their green charity t-shirts as they run on the day for a brilliant cause!”

Anyone wishing to donate should visit https://www.justgiving.com/The-Manchester-Grammar-School2 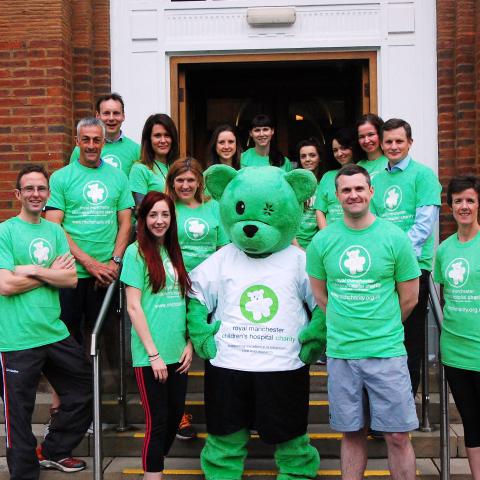