SPORTING Heroes from across the North West were celebrated for their amazing fundraising efforts at a special event last night (Thursday, 30th January).

More than 100 people attended the event, which was held for incredible people who have fundraised for hospitals in the Greater Manchester area, predominantly for Royal Manchester Children’s Hospital Charity.

Each person who contributed to that fantastic figure was celebrated at the special event, which also featured a motivating talk from guest speakers Jackie Groenen from Manchester United Women’s Team and motivational speaker and trainer Ric Moylan.

At Christmas, Jackie and her teammates visited the hospital and she was able to see for herself exactly where money raised by Royal Manchester Children’s Hospital Charity and its supporters goes.

Jackie, who brought along teammate Lotta Ökvist, said: “Everywhere I’ve gone with football I’ve tried to get involved in the community and I’ve always loved working with kids so the children’s hospital was the perfect fit.

“I’d heard so many good things about Royal Manchester Children’s Hospital, so when I realised the team was visiting there at Christmas it was great. I found visiting the children very inspiring – we all felt very good that we were able to make the kids happy – they were all so excited to see us.

“The Christmas visit, and meeting the fundraisers at Sporting Heroes last night, really made me want to do more with the Charity in future.”

The event took place on the top floor of the Hyatt Regency Manchester and was sponsored by Peninsula.

Among those in attendance was fundraiser Michael Tipper, who will shortly be climbing to Everest base camp to raise money for Royal Manchester Children’s Hospital Charity.

Michael, a postman from Stockport, said: “The speakers at Sporting Heroes were both so inspiring. I enjoyed both of them but I particularly liked Ric’s talk – he got everyone motivated and as soon as he finished I felt like I could leave and take on a challenge straight away.”

He said: “I felt going into 2020 was a bit tough and after running a marathon I didn’t really feel particularly motivated this year. But the talks from Sporting Heroes were just amazing. And meeting some of the parents and knowing what they’re going through has given me a bit of a kick.”

Viv Williamson, Senior Events Manager at Royal Manchester Children’s Hospital Charity, said: “It was so inspiring to hear from Ric and Jackie and they gave both the Events Team and our fundraisers a real boost to kick start 2020.

“We’re incredibly grateful to each and every one of our fundraisers who have challenged themselves to do something, often out of their comfort zone, for our Charity. Events like Sporting Heroes give us the opportunity to say ‘thank you’.”

The support of Royal Manchester Children’s Hospital Charity means the hospital can provide additional resources that make life easier for patients and their families who use the hospital.
The charity has three main areas of work:

To find more about how you can support Royal Manchester Children’s Hospital Charity click here to see a list of upcoming events. 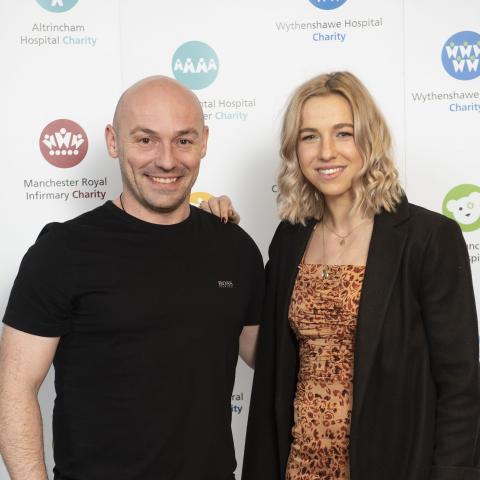