On Wednesday 12th November World Champion Snooker Player Shaun visited Royal Manchester Children’s Hospital to present a cheque for an amazing £4,100, a sum he has raised by donating £100 every time he makes a break of 100 or more in a competitive match.

Running from the 2013- 2014 World Championships at the Crucible, Sheffield, this is the third season which Shaun has raised funds for RMCH Charity.  ‘The Magician’ as he is known to many of his fans has raised over £7,000 to date. Shaun, 32, is a long-time supporter of Royal Manchester Children's Hospital, first becoming involved with the charity as a result of on-going treatment for his second cousin Maisie.

Taking a tour of the recently redeveloped radiology department, Shaun was greatly impressed by its transformation into a space themed unit, creating a much more child –friendly environment.

"I love having an association with Royal Manchester Children's Hospital Charity - it is a privilege to be an ambassador. I look forward to hopefully raising more funds for the charity this season."

“We were delighted by Shaun’s visit today and by his wonderful ongoing support of the charity. For someone with such a demanding schedule to give us so much of their time really is testament to Shaun’s generosity and we wish him every success in his upcoming championships.” 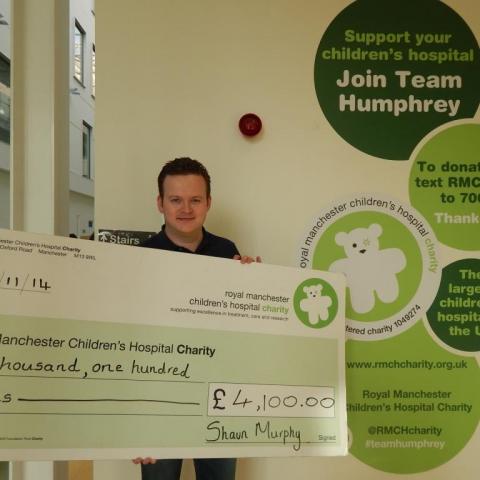