The partners from Accrington selected the charity’s Helipad Appeal to benefit from all funds raised on Tuesday evening. The appeal is raising money to build a primary 24 hour access helicopter landing pad at the hospital’s central Manchester site. Currently, poorly patients, airlifted from across the whole of the North West, must land in parkland over one mile away from the hospital. An on-site landing pad will dramatically save time, and lives, when every second counts.

Mick and Fred selected RMCH as this year’s chosen charity due to personally knowing children who have benefitted from the hospital’s specialist services. The Helipad Appeal especially strikes a chord as they know the importance of getting a child to hospital as quickly as possible.

The extravaganza which saw nearly 4,000 people attend the light switch was a huge success with Mick and Fred doing the honour of flicking the switch. There was also a German style Christmas market, hand-crafted gift stalls, live entertainment and of course, Father Christmas at the event.

To add to the excitement the lead up to the big day has been filmed by Channel 4 for their upcoming documentary which focuses on people from across the country decorating their homes in elaborate Christmas lights. The programme will be aired in Mid-December.

“Limewood Close is a small cul de sac of 18 houses tucked away in a quiet residential area of Accrington. For many years a couple of the residents went to the extremes in decorating the outside of their home with Christmas Lights. It was when the police pulled up 3 years ago that this changed Limewood Close forever, stopping to admire the decorations. With thanks to Lancashire Constabulary Limewood Christmas was born.”

“We’re raising funds for the hospital’s Helipad Campaign as it is vital that poorly and injured children from across the whole of the North West can be airlifted directly to the hospital when they are most in need of treatment.”

“We’re absolutely thrilled that Mick and Fred selected the hospital as their charity of choice this year. The light switch on is always such a huge community event and were incredibly grateful to have been involved. The generosity of both Fred and Mick, and the residents of Accrington, has been unprecedented.  They are a wonderful couple with helping others at the forefront of everything they do.”

For those who were unable to attend the light switch on but would like to make a donation to Fred and Mick’s fundraising please visit their Justgiving page https://www.justgiving.com/Fred-Brome1 or text LIME51 to 70070 followed by £1, £2, £5, £10 or £15. 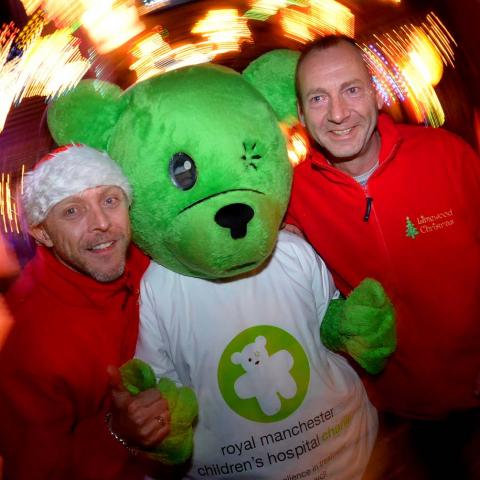