On 13 May, Liam Harris will be setting off on the ride of his life; cycling from Vancouver, Canada all the way along the Pacific coast to Tijuana in Mexico. At a distance of 3220km, the cyclist from Romiley, Stockport, will be undertaking his solo journey to raise money for Ward 84 and the Bone Marrow Transplant Unit (BMTU) at Royal Manchester Children's Hospital.

Liam has decided to raise money in support of Charlotte Jennings who was diagnosed with a very rare form of Acute Myeloid Leukaemia in January 2014.

The keen cyclist is hoping to complete his challenge in an impressive 21 days, taking in the sights of the scenic West Coast on the way, passing the Golden Gate Bridge and sunny Los Angeles. Liam will be meeting friend, Robert Moran, in San Francisco who will join him on the leg to LA but other than that he will be riding by himself along the coastal route.

This will be Liam’s longest cycle to date having previously peddled to Paris and back from Stockport as a warm up to his North American challenge. Liam has been cycling from Stockport to Buxton and back every other day to ready himself for his upcoming journey. He has been training hard despite the harsh winter weather which Liam says haven’t made for the most ideal of cycling conditions at times!

Liam’s biggest supporter is 12-year-old Charlotte who has also has been raising money for Ward 84 and BMTU at Royal Manchester Children’s Hospital where she received a transplant in summer 2014. When learning of Charlotte’s diagnosis Liam wanted to do what he could to support her.

"In January of last year I was shocked and sadden to find out my friend’s daughter Charlotte had been diagnosed with Acute Myeloid Leukaemia, I have been amazed by Charlotte's positively inspirational and brave approach to dealing with and fighting her cancer, not only has she undergone extremely harsh and invasive treatments but has also found the time to raise money and awareness for the hospital where she has been receiving treatment.

So inspired by Charlotte I decided to pick up my bike and start training for a solo cycle in May that will take me from British Columbia in Canada to Tijuana in Mexico, the route will take me down the Pacific Coast of the United States of America and is a total of 3220 Kilometres. I'm hoping to raise as much money as I can with a goal of a pound for every kilometre covered"

"I think Liam is brilliant, he is giving up his own time, pushing himself to the limit and paying all his own expenses to help me raise money. Our aim is to ensure that children on the unit, who are in total isolation for over two months while undergoing transplant, are able to keep entertained by having access to DVD players and games consoles to help ease the boredom of being in hospital for a very long time. Such distractions also make life easier for patients and their families at this very difficult time. Please help us in our fight against cancer by sponsoring Liam.”

“We wish Liam the best of luck with his impressive challenge. As far as I know this is the first time a fundraiser for the charity has cycled from Canada to Mexico, an incredible distance! Every penny he raises will make such a difference to some of our poorliest patients.”

Details on how to sponsor Liam can be found at https://www.justgiving.com/PacificCoastCycle 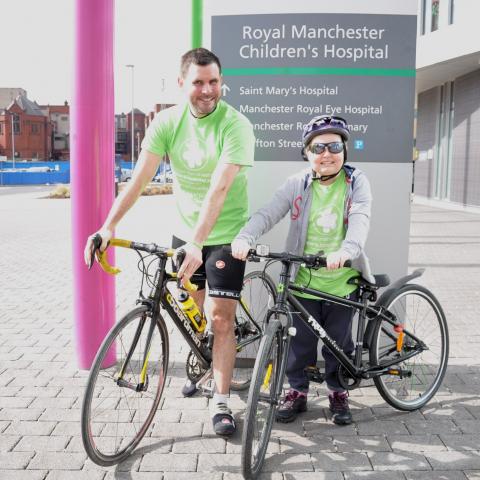