The Charity holds a special place in John’s heart, having been a supporter of the hospital for many years.  John regularly gets involved with the hospital’s charitable projects and was thrilled to help launch this latest fundraising initiative with some of our young patients.

John comments: “I’ve seen first-hand the incredible work being done right here on our doorstep for poorly babies and children from all over the North West, so I’m absolutely delighted to be able to help launch the Charity’s new weekly lottery. The more players we can get to sign-up, the more the Charity will be able to do for poorly children in hospital – it’s as simple as that. I want to encourage the people of the North West to get involved and do something amazing for a fantastic cause.”

The new lottery is a fun and exciting way to support the amazing work being done in the biggest children’s hospital in the country which looks after poorly babies and children from all over the North West. All money raised will help to make a difference for the thousands of children treated at the hospital by supporting projects which help ensure continued excellence in treatment, research and care. For just £2 per week players will directly fund Royal Manchester Children’s Hospital’s life-changing work, whilst giving them the chance to win a weekly cash prize of £1,000 or the annual bumper draw of £10,000.

Joining John for the lottery launch was 13-year old patient Declan McEntee who knows better than anyone how incredible the doctors and nurses really are at Royal Manchester Children’s Hospital.

After being born prematurely with a lung condition and then being diagnosed with meningitis at just three days old, Declan went on to suffer a range of medical conditions that has led him to have more than 14 operations, and many more medical procedures at the hospital, including bowel, heart, lung and ear surgery.

Declan’s mum Leanne comments: “There were times when it felt like the odds were against Declan getting better, but we’re so thankful to the amazing consultants, doctors and nurses who have taken care of him over the years. We honestly will be forever in their debt – which is why we support this incredible charity”.

If you want the chance of winning a top prize of £1,000 every week whilst helping a great charity then please visit our lotto page for more information and to sign up. 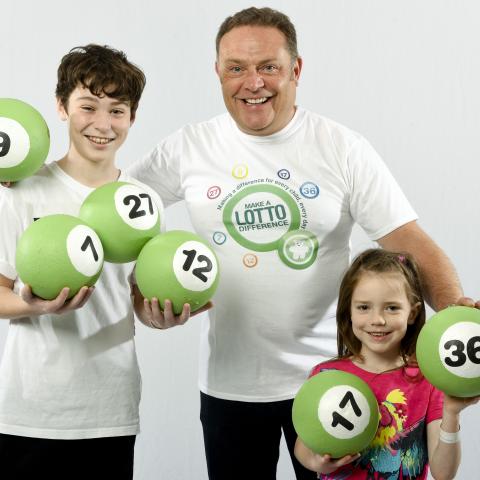