Jodie Kidd Gets Revved Up for Big Charity Drive

Television Presenter and Supermodel Jodie Kidd is asking people to get revved up and hit the road for a brand new fundraising event in support of Royal Manchester Children’s Hospital Charity.

The Big Charity Drive is the Charity’s first ever overseas driving challenge, taking place from 11th -14th September 2016.  The new event will see 20 adventurous teams drive from Manchester to its twin town, Chemnitz in Germany, crossing four countries in four days whilst raising vital funds towards the charity’s Helipad Appeal.

Jodie was joined by the Lord Mayor of Manchester, Carl Austin-Behan outside Royal Manchester Children’s Hospital to officially launch the event and unveil the route that participants will drive.   Starting from Manchester, the teams will head to Calais before completing the journey through Bruges to Chemnitz, and back.

As part of the automotive event, all participants will be challenged to drive cars worth less than £1,000 and will be tasked with customising their cars to a chosen theme. Over the course of the four days tasks will be set where points will be awarded to the teams. Following the event participants will attend a reception where one team will be crowned Champions of the Drive with each team member driving away in an Infiniti sports car.

“I’m delighted to help launch such a fun and exciting fundraising challenge! Raising money for charity is all about doing something a bit different, and this event is a great way for fellow driving enthusiasts to really challenge themselves whilst raising money for the very best of causes. Whilst at the hospital I was able to visit some of the young patients and was amazed by their positivity and bravery, despite the challenges they face on a daily basis. I’m very proud to support Royal Manchester Children’s Hospital Charity in launching Big Charity Drive and encourage people to get signed up!”

All funds raised from the Big Charity Drive will go towards the Charity’s fundraising appeal to build a 24-hour access helipad on location at the hospital’s Central Manchester site. Currently, the hospital relies on a secondary landing site in a local park, adding precious minutes to the transfer of an incredibly ill child. An on-site landing pad will help to dramatically reduce patient transfer times by up to two thirds and in turn, will help to save lives and improve patient recovery.

“Big Charity Drive is a fantastic way for people to have fun and enjoy an adventure that takes in some of the most stunning locations in Europe, whilst also helping us to make a difference. It will be a great way for the teams to engage with their local communities in asking for support.  People will also be able to track how the teams are getting on with their challenges and where they sit on the leader board following the daily challenges they need to complete. We’re really getting revved up for the event and are offering bonus sign up points to those registering before the 1st July!

For further information or to book your place on the Big Charity Drive please visit: http://www.rmchcharity.org.uk/events/big-charity-drive-2016 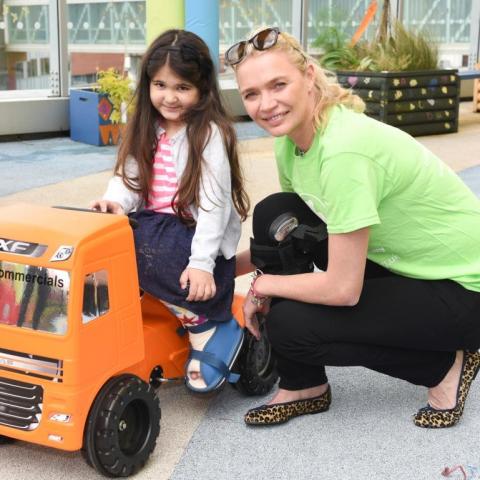