As 17-year-old Jenny’s treatment comes to an end at Royal Manchester Children’s Hospital, the total Jenny and her family has raised has topped an incredible £17,100.

Jenny, from Prestwich, Manchester, suffers from Polyglandular Addison's Disease. This condition is a failure of the adrenal glands which inhibits the production of Cortisol and Aldosterone. These hormones control the blood pressure and blood sodium levels. In unplanned stressful situations she does not have the ability to control her condition and she is susceptible to an Addisonian crisis which is life threatening.

In spite of her condition Jenny has remained positive, choosing to help raise awareness of her illness whilst also raising money for Royal Manchester Children’s Hospital.

Jenny’s illness means she is unable to climb mountains or cycle long distances to raise money but this has not stopped her from thinking of ways to fundraise to really help to make a difference to other patients.

Jenny’s fundraising began when her local cub group began to donate their spare change from the tuck shop. This money was collected in a tin, which became known as Jenny’s Pennies. She then decided to register as a fundraiser for Royal Manchester Children’s Hospital and chose to assist the work and research carried out by the endocrine team.

Since starting to collect pennies in 2006, Jenny has organised a Kylie Minogue Evening and a Christmas party for the children in her local community. She has arranged coffee and cake sales at church, organised raffles and even fundraised in her school lunch hour by selling a variety of handbags – all the money she has raised has made a difference to the children who are patients at Royal Manchester Children’s Hospital.

Amanda, Jenny’s mum, describes Jenny as a ‘beautiful young women who, regardless, of her complex medical conditions, still manages to support the hospital in whichever way she can. I think she is incredible and I am very proud of her’

Jenny has now transferred her care to Salford Royal but her and her family wish to continue to raise funds for Royal Manchester Children’s Hospital.

Jenny is currently studying at Salford City College and aspires to become a Doctor of Psychology in the future. It is her dream to work with young children who have various, long-term medical conditions.

Jenny Lloyd said: ‘I am truly grateful for all the support I have received over the past 10 years from my family, friends and staff at the Royal Manchester Children’s Hospital. I hope my fundraising efforts can continue in the future, so that more patients can benefit from my work’

“We are incredibly grateful to Jenny and her family for their continuous fundraising over the past 8 years, the amount they have raised is outstanding. On behalf of the charity I cannot stress enough what a difference Jenny’s Pennies has made to the hospital. We wish Jenny all the best for her future as she continues her care at Salford Royal.” 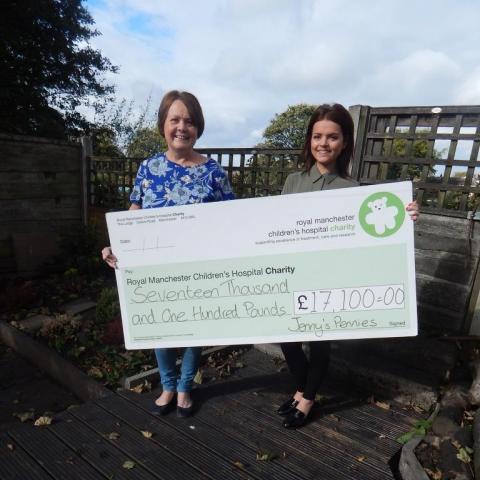