Jason Done Takes the Plunge at the Great Manchester Swim

Despite the torrential rain, and the far from ideal swimming conditions, charity patron, Jason completed the 1 mile open water swim at Salford Quays with no problem at all. Royal Manchester Children’s Hospital Charity was an official partner of The Great Manchester Swim with competitors taking on a unique dock to dock course.

Before the swim, Jason, from Worsley and now living in Marple Bridge, said: "I'm not a great swimmer but I wanted to challenge myself. I'm fairly fit and do boxing and boot camps and have been practising in my local pool”.

All the practice seemed to have paid off with him completing the swim in an impressive 35 minutes. Sporting a wetsuit kindly donated by Aquasphere, Jason swam front crawl for the duration of the race.

Prior to the event, Jason, currently filming a two-part series of Lewis alongside actor Kevin Whately, received tips from the top about technique and diet for his challenge from Olympic swimming champion, Rebecca Adlington.

During Jason’s training in the run up to the event, at Royles in Wilmslow, Rebecca Addlington commented:

"Jason's in good shape and is more than capable of completing the mile. I'm not saying he won't get tired but it's about confidence and belief.

"The Great Manchester Swim is a fun challenge and I admire anyone planning to take part this year. The event is suitable for swimmers of all abilities and the Royal Manchester Children's Hospital is a fantastic cause close to my heart."

Cath Tyldesley, this year’s Great Swim ambassador, was also due to complete the swim for Royal Manchester Children’s Hospital Charity but unfortunately had to pull out at the last minute due to a shoulder injury.

The actress, who plays, Eva Price in Coronation Street was still there to support her boyfriend Tom Pitford who was also swimming for the charity. Both have already raised an impressive amount of money for Royal Manchester Children’s Hospital Charity.

“I love to set myself challenges and I’ve done a lot of work with Royal Manchester Children’s Hospital, so hopefully I can raise a lot of money for that. It’s a charity that’s close to my heart.”

“I've been a patron of the charity for a number of years and I hope the support from the Great Manchester Swim makes a difference to thousands of children.

He joked: "Before the swim a friend told me the water at Salford Quays is very clean, though 10 years ago if you'd said you were taking a dip in there you might have feared about coming out of there alive!"

“After completing the swim myself I know how much of a challenge it was, especially in the terrible weather. We really appreciate all Jason and Cath’s hard work in the run up to the swim; their fundraising means a huge amount to the charity.

It is a fantastic event to be part of and I would encourage anyone with an interest in swimming to consider taking part next year. This year we had a record number of swimmers raising money for  our charity and we hope to increase this further in the future.” 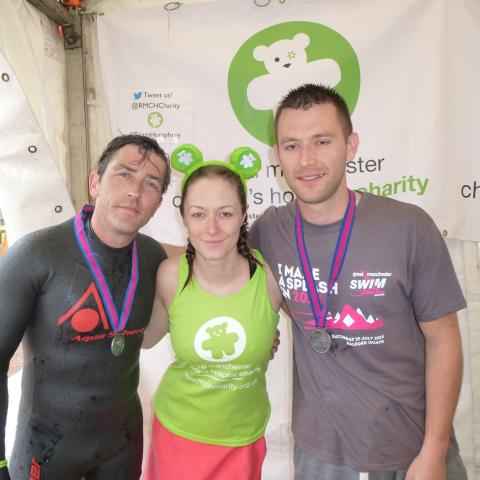