On Saturday 30 August, extreme fundraiser Jack Sexty could bounce into the record books for a third time this year by recording the fastest mile on a pogo stick. The 24-year-old Masters student, who in April became the first person in history to pogo an entire marathon, will attempt the speedy stunt in Helsingborg, Sweden, to boost funds for Royal Manchester Children’s Hospital Charity.

Jack, from Penkridge, Staffordshire, is hoping to add to the £2,000 of donations his pogo exploits have already raised for Royal Manchester Children’s Hospital Charity, as well as Alzheimer’s Research UK.

Jack’s latest challenge will take place at the grand finals of the showpiece extreme pogo event Pogopalooza. The annual world championships are organised by Xpogo, the international governing body of the urban pursuit.

Jack’s latest record bid is all about skill and speed, with the clock starting as soon as he mounts his pogo stick. No falls are permitted and the timer will stop as soon as he completes the mile. The record for the fastest mile on a pogo stick is currently held by New Yorker Ashrita Furman, who covered the distance in 12mins 16secs. Xpogo will sanction and verify his record attempt for Guinness World Records. He will be using a Vurtego V3 pogo stick for the challenge, which uses compressed air to propel users and can reach heights of over eight feet.

Jack, who studies journalism at Staffordshire University, explained his reasons for taking on another world record attempt in support of Royal Manchester Children’s Hospital Charity:

“Although it was very tempting to hang up my pogo stick after losing a layer of skin off my palms and being unable to move for a few days after pogoing the Manchester Marathon, this record thing doesn’t half get addictive, and soon enough I was looking for my next challenge. While this record might not match the downright exhaustion of pogoing an entire marathon, it’s going to be tough and I’m putting in the training to make sure I don’t disappoint on the day. I will have a course along the harbour-front marked out for me in Helsingborg and hopefully we’ll draw a large crowd.

“Once again I will be fundraising for Royal Manchester Children’s Hospital Charity.  Since first getting in touch with the hospital I have appreciated even more what vital work they do and how important it is to help to fund facilities which give critically ill children the very best chance of leading a normal life.”

“We wish Jack the best of luck for his latest pogoing challenge. It is fantastic to have a Guinness World Record setter as a supporter of our charity and it is an innovative ways of fundraising, like this, which really contribute to the work Royal Manchester Children’s Hospital is able to do."

More details of Jack’s challenge and details on how to sponsor him visit: uk.virginmoneygiving.com/mightaswelljump 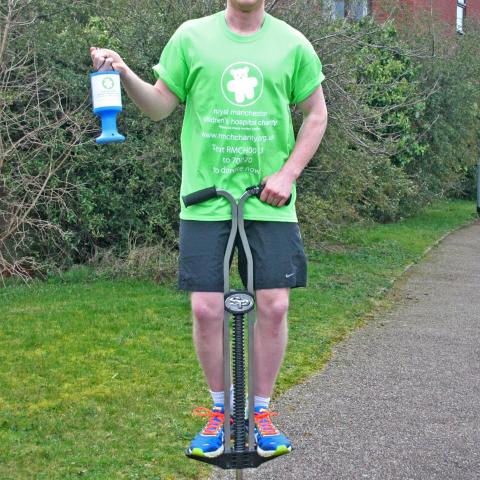