Some might claim he’s hopping mad but 24-year old Jack Sexty is hoping to jump into the record books by completing this year’s ASICS Greater Manchester Marathon on a pogo stick whilst raising funds for Royal Manchester Children’s Hospital Charity.

The Staffordshire University student, who lives in Penkridge, aims to the become the world’s first, and therefore fastest, person to complete the 26.2-mile road race purely on a pogo stick, whilst simultaneously challenging for the Guinness World Record for the furthest distance pogoed within 24 hours.

Jack, who is aiming to complete the Marathon in less than 12 hours, will be allowed a break of up to five minutes in every hour bounced and must remount his pogo stick within 30 seconds if he falls off. The attempt will be recorded by a camera crew for record verification purposes and Jack will be supported throughout by family and friends carrying spare equipment and refreshments.

He will begin his Marathon task from the back of the 10,000 strong field and hopes to have completed around half of the distance before the race route is reopened to traffic, with Jack then relying on volunteers to help him complete the remaining distance along suitable pathways.

“I will be fundraising for both Royal Manchester Children’s Hospital Charity and Alzheimer’s Research UK. RMCH Charity is one of the local nominated charities for the race and I have chosen to support them in recognition of my gratitude to the organisers of the Greater Manchester Marathon for allowing me to attempt my world record on their course. Since first getting in touch with the hospital I have appreciated even more what vital work they do and how important it is to help to fund facilities which give critically ill children the very best chance of leading a normal life.”

“This is an incredible undertaking by Jack and we are delighted that he has chosen to support RMCH Charity in such an innovative and energetic fashion! Pogoing over 26 miles is an incredible physical commitment and we really hope that people will be inspired by Jack’s efforts and will sponsor him to help give him the encouragement he needs to keep going on this gruelling challenge.”

Already a keen runner and triathlete, Jack was inspired to take on the unusual challenge after being reminded of an incident from his childhood. He said:

“When I was 13 I pogoed into school in a vain attempt to redeem myself for getting into lots of trouble. Ten years on this episode came up in conversation and I was curious to know whether there was a record for the furthest distance bounced. James Roumeliotis, the current record holder for the furthest distance pogoed in 24 hours, did his challenge in a small, square circuit. That’s when I decided to try to beat his record in a way that people could interact with and watch me on my journey.”

“I have been training in carefully selected quiet locations, much to the bewilderment of a few dog walkers that I have come across. I’ve so far completed ten miles in under 3.5 hours so on that basis I’m on track to beat the record. However, pogoing for a prolonged period hurts your hands and puts strain on your calves so I know it’s going to be an extremely physical challenge.

“I’m extremely grateful to everyone who has agreed to help me, especially Xtra Mile Events, the Marathon organisers, for letting me use their course for the record attempt.”

The record for the furthest distance bounced in 24 hours is currently held by American James Roumeliotis, who covered 23.22miles in 14 hours 32minutes in 2011. Xpogo LLC, the international governing body for the sport of ‘extreme pogo’ has agreed to sanction and verify his world record attempt on behalf of Guinness World Records and will supply him with the very latest in pogo stick technology, the Flybar, which can propel riders up to 7ft 6inches off the ground.

To support Jack’s fundraising efforts, donate online at http://uk.virginmoneygiving.com/MightAswellJump , or find how his training is progressing at https://www.facebook.com/mightaswelljumpworldrecordattempt or at Twitter on https://twitter.com/MAWJextremepogo 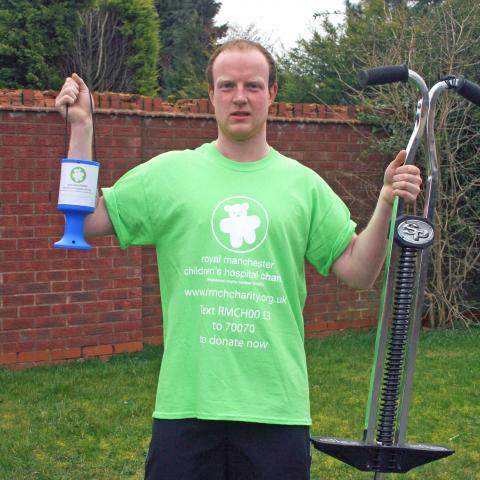