The family of 9 month old Isabella Foster from Stoneclough near Bolton have been celebrating the end of her treatment for Neuroblastoma.

For the past five months Isabella has been treated for the rare form of cancer on Ward 84 of Royal Manchester Children’s Hospital, the regional centre for the treatment of childhood cancers.

Isabella was held by mum, Charlotte and dad, Daniel, as they rung the End of Treatment Bell to symbolise the end of her gruelling treatment. Joining her were members of her family as well as Isabella’s consultant, Dr Penn.

Whilst at the hospital, Isabella’s family presented Royal Manchester Children’s Hospital with a cheque for £2,211.24 raised for the ward which cared for their baby daughter over the past months.

Dad, Daniel recently completed the City of Manchester10 KM to help their fundraising, smashing their original target of £200! Their fundraising was also helped by Charlotte’s work colleagues at DWP North West, Swinton NHS clinic staff and £265 was also raised by the Salford branch of Halifax, who held various activities, including a book sale.

Isabella was diagnosed with Neuroblastoma in April, her symptoms included screaming in the night and refusing feeds. Initial diagnosis suggested a viral throat and chronic constipation. However, after being admitted to Bolton A&E Isabella was immediately transferred to Royal Manchester Children’s Hospital where she was diagnosed with a tumour.

“We were originally advised that when we got onto Ward 84, reality would hit home and we would see some very poorly children, both my husband and I dreaded going there for the first time.  In reality, Ward 84 is a very special place where we felt part of a family.

Everyone is going through the most horrific thing and yet the staff ensure that all the children can have as much normality as possible and that all the parents have all the support they need. If the money we raised helps one family get closer to ringing the bell, we've achieved our goal.

We cannot think of a better place to raise funds for and will continue to plan future fundraising events.”

Isabella’s tumour has now shrunk considerably following her treatment on Ward 84, however the remaining tumour cannot be removed as it could potentially cause more nerve damage.  As a result of the tumour, she also has a drop foot which requires the use of a splint, but nonetheless, Isabella’s family remain optimistic for the future.

“We are incredibly grateful to the Foster family for their fundraising, Daniel did fantastically raising so much money by taking part in the City of Manchester 10 KM, despite it being his first ever run! Their dedication to raising so much despite everything they have gone through with Isabella really shows what a kind-hearted and generous family they are. All funds raised for Ward 84 help to make life a little easier for our young cancer patients and their families.”

Awareness for Neuroblastoma has been raised in the past month thanks to Coronation Street’s recent storyline. Fiz’s daughter, Hope, was diagnosed with the rare cancer recently in the hit soap. RMCH Charity patron, Jennie McAlpine who plays Fiz, recently visited Ward 84 to meet some of the hospital’s brave patients and their families. Jennie’s visit was filmed by ITV and featured on This Morning.

The End of Treatment Bell, which Isabella recently rung, was brought to the UK by Ward 84 patient, Emma Payton in 2014. Emma was given Proton Beam Therapy in Oaklahoma, on completion of her therapy ringing their bell in front of other patients and staff. On returning home Emma and her family decided to help bring the bells to hospitals across the country. Today, there are three at Royal Manchester Children’s Hospital. 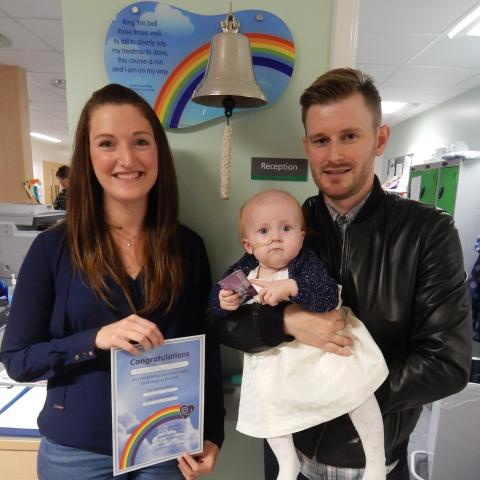