A group of inspirational young patients are the stars of a brand new fundraising film for Royal Manchester Children’s Hospital Charity.

The film, created by Liverpool video agency, Zut, is told from the perspective of seven brave patients who are all treated at the hospital for various conditions and share their personal stories about their time spent at the children’s hospital.

One of the patients is Tia Taggart, aged eight-years-old, who has been treated on-and-off on Ward 84, the oncology and haematology ward at Royal Manchester Children’s Hospital for the past two years. Tia is battling an aggressive form of cancer called Ewing Sarcoma and undergoes chemotherapy for tumours in her pelvis and legs as well as rounds of radiotherapy to treat her bone and lung cancers. Despite everything Tia has been through she is always determined to help others, and is a loyal fundraiser for the hospital’s charity raising thousands through her Jetset Angels.

“For someone so young, Tia has been through so much but is always determined to help others going through a similar situation. She’s really passionate about fundraising for Royal Manchester Children’s Hospital so when the charity team asked if she would like to be in the film she didn’t hesitate to say yes.”

“Many people don’t realise just how big the hospital is and how many patients it treats until their child is ill and they need to go there. We can’t thank the hospital enough for everything they’ve done for Tia, so helping out with this film and creating awareness for the charity was our way of being able to show our thanks. All the children in the film are incredibly brave – it’s humbling to watch and hopefully will encourage others to show their support.”

Sarah Naismith, Head of Royal Manchester Children’s Hospital Charity, said: “We were blown away when we watched the film for the first time. Tia and all the patients are just so inspiring and it is incredibly moving to hear the stories told through their own words. We are really grateful to the children for sharing their stories with us and for fundraising for the hospital which provides their care. Between them they have raised thousands which is really helping to make a difference. We hope the film will strike a cord with all who watch it and inspire families, groups and individual fundraisers to support our charity’s mission to make a difference for every child, every day.” 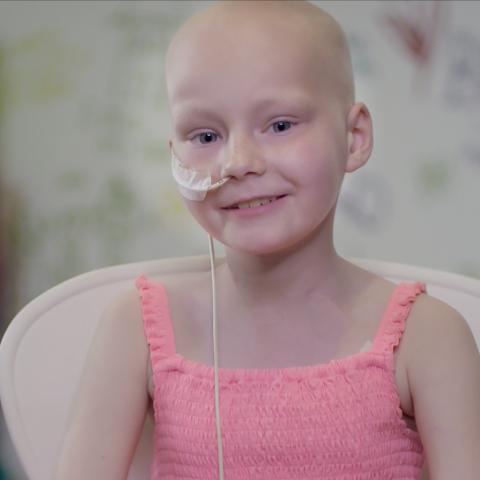