A seven-year-old who was born with some of his organs outside of his body is preparing to complete his first-ever run to support Royal Manchester Children’s Hospital where he is a patient.

Max Jones, from Whaley Bridge, High Peak, will be taking part in the Simplyhealth Junior and Mini Great Manchester Run on Sunday 20 May with his two brothers, Harry and George, despite undergoing over 14 operations in his young life.

Max was born seven weeks premature at Saint Mary’s Hospital in Manchester with an exomphalos, a defect of the abdominal wall that caused a part of his bowel and intestines to protrude outside of his body.

Surgeons fixed Max’s stomach when he was two-days old but over the coming weeks, he struggled to breathe for himself.

Max was then transferred to Royal Manchester Children’s Hospital where he was diagnosed with a rare genetic disorder called Beckwith Wiedemann Syndrome. His parents, Rachel andDale, were told that he would need a tracheostomy to be able to breathe for himself.

After 16 long weeks, Max was able to go home before receiving pioneering surgery when he was one-and-a-half to remove the breathing aid.

Following several other operations over the last seven years, Max decided that he wanted to take on a challenge at the Simplyhealth Junior and Mini Great Manchester Run to say thank you to the hospital for his care.

Mum Rachel, 37, said: “Max has undergone a lot of surgeries and has remained under the amazing care of Royal Manchester Children’s Hospital.

“The hospital will always have a special place in our hearts for the care they have given Max and for the incredible support they have provided to our family along our journey.

“At eight weeks old the doctors explained that Max required a tracheostomy to enable him to breathe for himself. My heart broke but we had complete faith in Royal Manchester Children’s Hospital team and they reassured us that this procedure would enhance his quality of life.

“Max had surgery to insert a tracheostomy tube into his airway in May 2010. Up to this point, he had been on a ventilator and his little body was permanently tired. He rarely woke and had never even smiled.

“When Max returned from surgery, he was breathing for himself and was a beautiful shade of pink! Over the coming days he became more alert, dazzling all of the staff with his smile!”

Max’s family were specially trained to care for him, learning how to feed him, to care for and change his tracheotomy tube.

After being under the care of the hospital for so long, Max, who is now seven, decided to set himself a fundraising challenge for Royal Manchester Children’s Hospital Charity at Manchester’s biggest children’s running event.

The event is part of an exciting day of sport for all ages in Manchester, where children can be their greatest as they take on a challenge through the city centre.

It’s part of a day where thousands of people will run together at the Simplyhealth Great Manchester Run, an event like no other in the undisputed capital of the North.

Rachel added: “We were absolutely thrilled to be able to take our little boy home. It was a huge moment for our family.

“Max went on to receive pioneering surgery at the Children’s Hospital to help his breathing and a few weeks before his second birthday he was able to have his tracheostomy removed and we got to hear our amazing boy speak his first words.

“Max really wants to take part in the Mini Run to fundraise for other children who are treated at the hospital. It won’t be the easiest thing for him to do but he really wants to set himself a challenge to help others.”

To sponsor Max in his fundraising challenge please visit: www.justgiving.com/fundraising/rachel-jones152 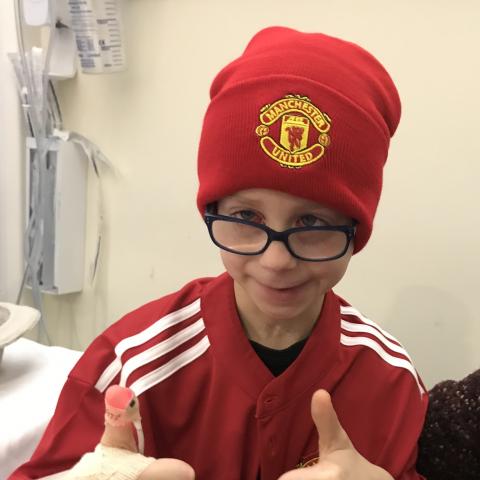