Blind runner Azeem Amir is back on the fundraising trail – and is calling on Mancunians to join him.

The 18-year-old, from Sudden in Rochdale, will take on the Simplyhealth Great Manchester Run 10K in aid of the Royal Manchester Children’s Hospital – and is recruiting a team of runners to join him on Sunday, May 28.

Azeem was born with no sight in his right eye and slight light perception in his left eye but has never let this act as a barrier in life and runs with his old PE teacher Sam Hinchliffe as a guide.

Azeem made headlines last year when he became the youngest blind runner in the world to complete a Tough Mudder, but regards Great Manchester Run as his favourite event of the year by far.

Now, he will return to Manchester’s greatest run with new targets and an ambitious goal to recruit inactive people to join him, using the mantra that ‘if I can do it, anyone can do it.’

“I want to beat the time again. Now I know what to expect from the event, we can improve this year.

“Last year it was very hectic, but very enjoyable, I really loved the whole day. It’s probably my favourite event of the year.

“There’s so many different levels of runners, from the elites to those who are just wanting to get round.

“The whole feel of the event, the atmosphere, the crowd, the sensory element is something which can only truly hit you when standing on the start and finish line.

“That’s the aim of the event – at the end of the day it’s about finishing.”

Azeem revealed his reasons for selecting the Royal Manchester Children’s Hospital as his nominated charity for the Simplyhealth Great Manchester Run, adding: “I’ve been blind since birth so know better than anyone what it’s like to grow up with a health condition and to need specialist treatment and care.

“That’s why I want to run in support of Royal Manchester Children’s Hospital, to raise awareness for an incredible hospital that does amazing work for poorly children across the North West.

“A price can’t be put on how important such care is and the hospital don’t only offer care but out of this world support to the families of their patients – personally this is what got my parents through what then was the toughest time of their lives.

“We want as many people involved as possible. If I can do it, anyone can do it.

“I want people to read my story and sign up for the run. If they see that I can do it, they will be inspired and also get involved.”

Lucy Naylor, Events Manager at Royal Manchester Children’s Hospital Charity comments: “We’re constantly inspired by Azeem’s determination to achieve his goals, his zest for life and motivation to help others along the way.

Azeem is an ambassador for many disabled organisations across the region and is also a talented blind footballer currently playing for Merseyside Blind FC and is on the FA’s England Emerging Talent Programme with the aim of representing his country in the future. He aims to be selected in the Great Britain squad for the 2020 Tokyo Paralympics. 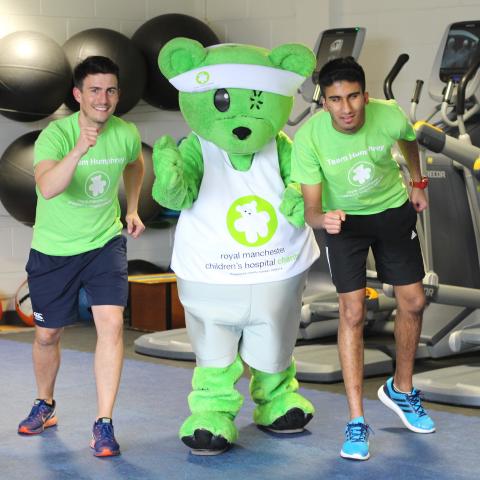