TV STAR Olivia Birchenough and charity mascot Humphrey the bear met with winners of this year’s Teddy Toddle this week.

This week hundreds of youngsters aged under 6 from across the North West have been doing their own sponsored walks to raise money for the charity. All funds raised help towards funding specialist Play Therapy for young patients at Royal Manchester Children’s Hospital.

At Kinderview, about 100 pre-school children attended the event to meet Humphrey and listen to a story from Channel 5’s Milkshake! presenter Olivia.

Olivia said: “It was such a fun day meeting all the children at Kinderview – they were all very enthusiastic and there were lots of excited toddlers toddling.

“It was great to read them a story and then see all the hard work they’d put into making their own Humphrey ears to wear.

“I loved being part of the Teddy Toddle event – it was so fun and full of energy. I was particularly pleased to take part this year, as it’s the hospitals 10th birthday – so an extra special year to be part of Teddy Toddle.”

One youngster at the nursery thought he was going to miss out on the event, mistakenly thinking the Teddy Toddle was during his family holiday.

Stanley and his mum Louise took pictures of “Humphrey’s Holiday” and shared pictures of teddy Humphrey with them on their holiday in Majorca. He had lots of fun playing football, walking along the beach, climbing trees and tucking into yummy food and drink. Supporters followed his adventures on social media and raised more than £100.

Thankfully the holiday wasn’t actually during Teddy Toddle Week (20th-24th May) so Stanley was also able to meet Olivia and Humphrey.

“Well done to all the youngsters at Kinderview and all the nurseries that took part – you all did really well.”

Click here to find out how you can get involved in upcoming events. 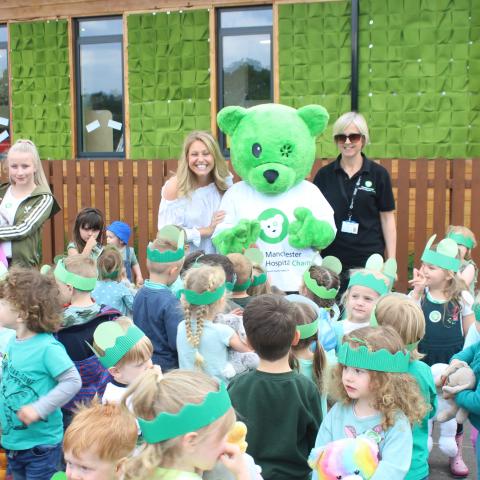