Today Royal Manchester Children’s Hospital Charity (RMCH Charity) launched its superhero abseil, Humphrey’s Heroes. To mark the occasion a team of the world’s most famous superheroes including Spiderman, Superman and Batman surprised patients by scaling the hospital building before abseiling down, much to the delight of waiting youngsters.

The abseilers from company, Green Access cheered up many of the children who were just too poorly to leave their rooms, providing smiles across many of the hospital’s wards. One patient who particularly enjoyed seeing his heroes was 11 year old Joshua.  All three heroes waved at the youngster through the window of the ward after he eagerly awaited their decent.

With two feet safely on the ground further superheroes entertained patients in the hospital’s atrium, characters such as Batman, Wolverine and Wonder Woman kindly provided by, Heroic Alliance, a not for profit organisation formed from a group of costume and prop-makers.

“It was so cool seeing Batman at my window, he is my favourite. I’ve been in hospital for two weeks and so it was a good surprise seeing the superheroes.”

The Charity is encouraging participants to don their capes dressed as their favourite hero (or villain) as they descend the 240 ft building at Manchester’s tallest abseil.

The event, kindly sponsored by Sodexo and organised by Over the Edge asks participants to raise a minimum amount of £150 per person to raise funds to build a designated, 24 hour access helipad on location at the hospital’s central Manchester site.

One have a go superhero who is ready to take on the challenge is 29 year old Chris from Altrincham. Chris says:

“I will be conquering my fear of heights by taking on this abseil! I’m terrified of peering over the edge and looking down but I know it is nothing compared to what some of the children at the hospital go through. Their bravery is amazing and if I can make a small difference by abseiling off the tower and raising money in the process then I am more than happy to be involved.”

“Every day each and every one of our patients are real life superheroes. Today we wanted to give something back by surprising the children at the hospital with some of their favourite comic book and television superheroes. Today has been so enjoyable for all involved and it was fantastic seeing such big smiles on the children’s faces.

It was a brilliant launch for our upcoming public abseil in April; we encourage anyone who is feeling inspired to don their capes and to try something different by scaling down Liberty Heights with us, raising funds for our Helipad Appeal.” 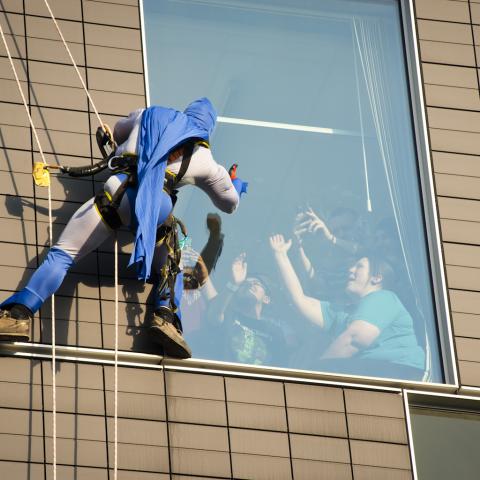