BATTLE of the soaps turned battle of the ropes when celebrities joined a charity abseil at the weekend.

Ashley Taylor-Dawson completed his abseil on the Saturday, joking that Hollyoaks were braver than Corrie. He said: “I hear Tina and her fella are doing it tomorrow. I hope they shake and cry and weep as much as I did.

“I think I smashed it. I wasn’t nervous at all, honest. So obviously Hollyoaks are bravest.”

On Sunday it was the turn of Tina O’Brien who, like many abseilers, decided to ‘descend with a friend’ – her husband Adam Crofts. Watching on from the bottom was their son Beau, who cheered on mummy and daddy with Charity staff.

Tina said: “Oh please! Corrie are bravest every day of the week. We are tough, we are so tough. We are proper Manchester.

“I’d encourage everyone to sign up next year – it’s the most incredible experience ever.”

Also among the abseilers were a team from Peninsula, the event’s corporate sponsors, who all came dressed as superheroes too.

Group sales director Geoff Ford, dressed as Superman, descended with his brother Jeremy. Geoff said: “The costumes were a bit hot but it was for a really good charity so I didn’t mind, and we raised quite a bit of money too.

“I was so pleased we were able to raise an extra £700 too, as we got a few more people to sign up on the day.”

Teams from ANS, Peninsula, Royal Manchester Children’s Hospital and the Starlight Unit (a satellite ward of RMCH based on the Wythenshawe Hospital site) all descended, as well as individual fundraisers, many of who had a personal reason for wanting to support the charity.

Family and friends cheered participants on at the event, which is thought to have raised in excess of £15,000 – but with more money still to come in it may be significantly higher.

Royal Manchester Children’s Hospital Charity’s events manager Viv Williamson said: “We were blown away by just how much effort went into costumes and how brave all those abseilers were. The weather was on our side on both days and it really made for a fantastic event.

“We’re so grateful to everyone who came along and either cheered, sponsored someone or abseiled – it really made our day seeing all those smiling faces.”

Ian Puleston-Davies agreed the abseil was a huge success and has encouraged Charity supporters to sign up to other future events. He said: “We had so much fun raising money for the wonderful Royal Manchester Children’s Hospital Charity. It’s been great and I’ve been so proud to be part of this fantastic event.”

Later this week, on Friday, 5th July, the charity’s Be Seen in Green day will be taking place, where supporters are encouraged to dress in green and make a donation to Royal Manchester Children’s Hospital.

To find out more about all the Charity’s event, including the upcoming skydive and Birthday Ball, visit our Events Page.

To see video interviews with the abseiling celebrities visit our You Tube channel.

Click here to see a full gallery of photos. 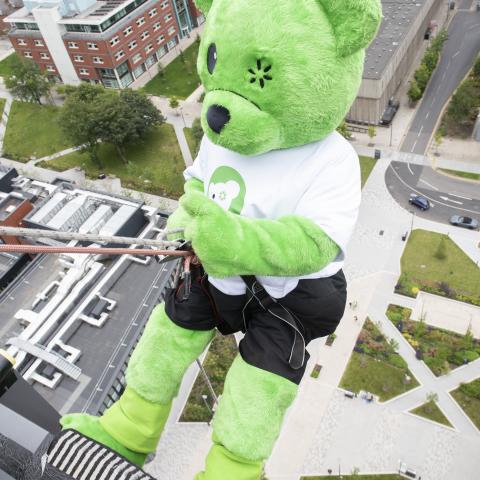