Heroes from the Royal Manchester Children’s Hospital helped to celebrate the launch of their new charity partnership with Stagecoach Manchester.

100 nurses, who were all involved in treating children injured in the arena attack were gifted tickets by Key 103 to the Key Live 2017 concert (held on 9 November) while Stagecoach Manchester, who sponsored the concert,  invited Lily Harrison, her friends and family as VIP guests.

Lily, who was looked after at Royal Manchester Children’s Hospital following the blast, was treated to performances by Rita Ora, Louis Tomlinson and Zara Larson alongside a packed house at the arena.

The tickets for Lily and her family were a gift from the bus operator as it kicked off a two- year partnership with Royal Manchester Children’s Hospital Charity.

The charity partnership announcement comes on the back of Stagecoach Manchester announcing its staff and passengers raised over £21,900 for Prevent Breast Cancer.

Elisabeth Tasker, Stagecoach Manchester managing director, said: “The victims and emergency services showed tremendous bravery both on the night of the tragic incident and in the months following and a number of our staff and buses were also involved on the night of the attack in helping to get people to hospital. This led our staff to throw their weight behind the Royal Manchester Children’s Hospital Charity by selecting them as our charity partner for the coming two years.

“I’ve heard Lily had a fabulous time at the concert along with the nurses from the hospital, and we’ll now get our heads down at Stagecoach Manchester to think as creatively as possible to raise much needed funds.”

Joel Oxberry, Corporate Fundraising Manager at Royal Manchester Children’s Hospital Charity comments: “We’re thrilled that Stagecoach has chosen to support our Children’s Hospital over the next two years. Support like this from local businesses is absolutely invaluable to the charity, and helps to make a real and lasting difference to the poorly children treated at the hospital. We’re looking forward to working together on fundraising ideas and can’t wait to get started!”

Lauren Harrison, Lily’s mother said: “As a devoted pop princess this was a real treat for Lily, we all had such a fantastic time at the concert. Ever since the attack we have been fundraising in any way that we can to give back to the hospital and want to say another massive thank you for all that they have done for our family.” 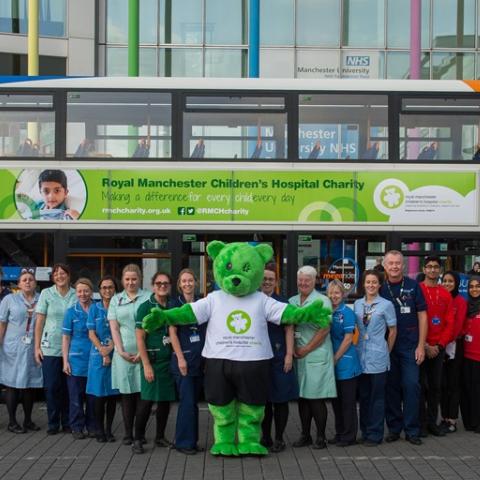