The Gatley school and bank took part in our annual Be Seen in Green day, a fundraising campaign which asks participants from local schools and businesses to wear something green, the colour of the charity, in return for a small donation.

They were both picked at random from those participating to win a visit from the Hollyoaks and Strictly Come Dancing star.  At the school Ashley impressed pupils and staff alike with some of his memorable Strictly moves. Posing as budding journalists, the pupils had practiced a variety of questions to ask the star before posing for lots of photographs with Ashley in the glorious sunshine. Sporting her green Humphrey bear ears was Emma Payton, an ex-patient of the hospital’s Ward 84. Ashley spent a lot of time chatting with the 9 year old and her mum Tracy who also works at the school.

Whilst at Handelsbanken, Ashley shared his dancing secrets along with spilling the gossip on playing Hollyoaks’ Darren Osbourne.

“We had a fantastic morning, the sun was shining and the children were very excited to be treated to a visit from Ashley. It was great for them to learn more about the work the charity does. Ashley was fantastic with the children and they loved quizzing him!”

Funds raised by this year’s Be Seen in Green campaign are being donated to the hospital’s Ward 84 which treats children and young people with cancer. The ward receives 120 new patients a year with children travelling from all over the North West to receive treatment at the hospital. The aim is to make the environment as bright, comforting and homely as possible, putting the young patients at ease and providing a welcome distraction for children suffering from life threatening diseases.

On returning to Royal Manchester Children’s Hospital, Ashley then surprised patients and staff with a visit to Ward 84 where he spent time chatting with families of poorly children on the ward.

Ian Cubbin, father of Josh Cubbin who has recently been receiving treatment on Ward 84, and employee at Handelsbanken says:

“I cannot thank Royal Manchester Children’s Hospital enough for everything they have done for my family. I know Handelsbanken wanted to support the charity in any way that they could and Be Seen in Green was the perfect opportunity. The effort the company has gone to is extraordinary, pulling out all the stops to raise as much money for Ward 84 as possible.

We really appreciate Ashley coming to Handelsbanken today as well as taking the time to visit Ward 84. I know myself what a difference it makes to the patients having someone come and visit who wants to chat and play with them.”

“I had a fantastic day visiting Gatley Primary School and Handelsbanken to thank them for their huge fundraising efforts for Be Seen in Green. It was wonderful meeting Emma Payton and great to see her back in school and on the mend. As a parent myself I was particularly moved by Ian Cubbin’s speech about his son, Josh.  Visiting the ward really brings home why we need to continue raising money for Ward 84.” 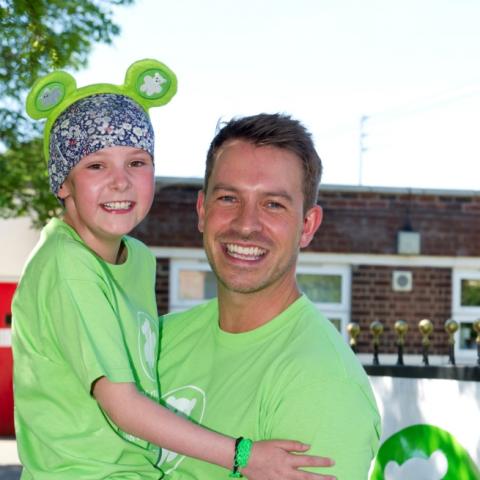