Using the strapline, ‘Time Saves Lives’, the Helipad Appeal will enable the creation of a brand-new 24-hour access primary helicopter landing site, the first of its kind in central Manchester. This will allow the Trust to save many more lives and will increase the chances of a full or improved level of recovery in a great many seriously ill or injured patients.

Located on the roof of the new multi-storey car park on Grafton Street, the helipad will be connected to the hospitals by a high-level link bridge and roof top corridor.

The hospitals which make up the Trust see over one million patients each year, looking after patients from birth to the end of life, from across the whole of the North West, and often beyond. Each of the hospitals offers internationally recognised specialist services for critically ill patients. The hospitals provide rapid access to treatment and rehabilitation for adults, children and babies following a life threatening or life changing physical injury. Despite the range of specialisms the hospital site is without its own designated helipad.

Currently, Royal Manchester Children’s Hospital, along with the other hospitals, relies upon a secondary landing site in a nearby park, an arrangement which means that patients initially transported by air ambulance must then be transferred the final mile of their journey by land ambulance. This second transfer, often undertaken on muddy or uneven ground, significantly adds to the risk of complication, particularly in children, due to additional handling of the patient. A secondary transfer also adds precious minutes to the overall transfer time with every moment’s delay greatly increasing the risk to life.

Mark Evans, Clinical Service Manager at the North West Air Ambulance knows only too well the benefits an onsite landing would have:

“Few hospitals have helipads and so we regularly have to resort to using designated secondary sites which adds further journey time in cases of major trauma when every minute counts.

We are fully in support of a helipad at Central Manchester Hospitals; it will make a significant difference to the survival and early recovery of patients across the North West.”

“Royal Manchester Children’s Hospital is the biggest, busiest and I would argue best, children’s hospital in the UK. However, sometimes when a child is critically ill, time is against us. Every minute that passes reduces our ability to intervene to maximise their chance of a good outcome. This helipad can save those precious minutes and allow us to make a difference which for those children lasts a lifetime.”

The Appeal was launched by the Charity staging a photo with a difference. To represent the large number of people involved in the transfer and subsequent care of major trauma patients, and the care of those who benefit from the site’s specialisms, around 70 key players gathered to form the shape of an ‘H’ – the markings of a helipad. From trauma and transplant consultants, paramedics and air ambulance pilots, to porters and other vital hospital staff, all came together to show their support for the Appeal.

Such staff were joined by Chairman of Central Manchester Foundation Trust Charitable Fundraising Board, Maurice Watkins CBE and Royal Manchester Children’s Hospital Charity mascot, Humphrey, along with patients who know more than anyone the need for an onsite helipad. Click here to read their stories.

Over the next year the Helipad Appeal will take the lead focus of the Charity’s fundraising, as they look to rally support from the whole of the North West. As Chairman of Central Manchester Foundation Trust’s Charitable Fundraising Board, Maurice Watkins CBE, says, every penny counts:

“This Appeal is the perfect opportunity for the whole of Manchester, and in fact the whole of the North West, to come together to support a service which will benefit the entire region. If a member of your family was to suffer a critical injury there is no place else you would want them to be treated.

Thanks to donor support we successfully raised funds to support the development of the largest children’s’ hospital in the country, so we know that if we work together again we can achieve our target. Every single person who decides to support this Appeal will be playing a vital role in securing faster and more effective transfers for our major trauma patients of the future. It cannot be emphasised enough that small donations are as valuable as larger donations. Together your support will help to reduce dramatically patient transfer times by up to two thirds and in turn will help to save lives and improve patient recovery.”

To view photos from the launch of the Helipad Appeal check out our gallery which includes a ‘Who’s Who’ of the launch photo – you may spot a few familiar faces! 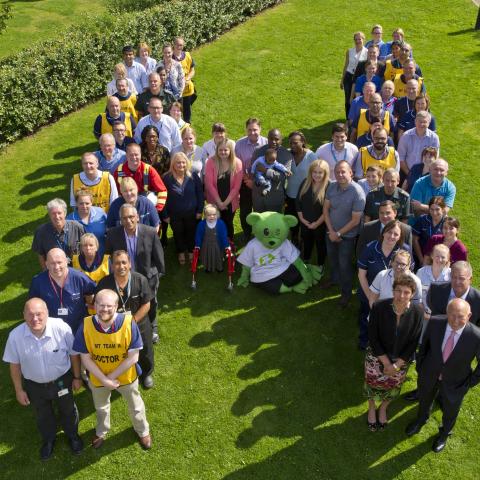