On Saturday 18th and Sunday 19th July the Great North West Truck Show arrives at the Etihad Campus for a weekend to remember. The truck show organised by Karl Gratton and Paula Jones will be raising money for Royal Manchester Children’s Hospital Charity (RMCH Charity).

Trucker, Karl, from Ashton under Lyne, works for Broadhurst Transport and has a personal connection with the hospital.  When he was just 1 and a half hour’s old medical staff at Pendlebury (the former Royal Manchester Children’s Hospital) discovered he had a complicated umbilical hernia. He was treated immediately at birth and in the words of Paula:

“Basically it is thanks to them he is here almost 50 years on to tell the tale. His mother said they were wonderful.”

Karl has previously been involved in the annual Ginger’s Egg Run to the hospital, providing Easter Eggs for the poorly patients. Following this Karl, along with much help from Paula, decided to hold their own event to support RMCH Charity as a way of saying thank you. The truck enthusiasts jumped at the chance to hold a show in their local area after realising there are no others of the sort in the North West.

The North West Truck Show is kindly being sponsored by Karl’s employer, Broadhurst Transport, owner Stephen Broadhurst from Staleybridge having his own personal connection to the hospital. In 2005 his daughter Georgia was treated for Leukaemia at Pendlebury and now still visits RMCH for check-ups.

There will be a wide variety of show-stopping trucks at the show including large American trucks and customised trucks as well as light commercial and working vehicles. Also there will be trucks of the classic and vintage category. The  Bolton cast of  BBC’s ‘Scrappers’ will be at the campus to chat with attendees .Also appearing at the truck show will be Fiona Soltysiak, the well-known driver for Eddie Stobart.

“I’ve wanted to organise my own truck show for years so holding one in support of the children’s hospital makes perfect sense. RMCH which means a lot to myself and event sponsor, Stephen. I hope the weekend will raise a fantastic amount of money for this amazing hospital. It was great having Humphrey come visit some of the trucks, if he fancies a change of career he would make a fine trucker!”

“We are so excited to be involved in this event! It’s going to be a fantastic weekend for the whole family to enjoy. We are incredibly grateful to every single one of the truckers who will be showcasing their vehicles, Karl and Paula have gone to so much effort and I’m sure this will show over the two days.”

The event is pay on the door at the price of £10 for an adult (Under 16s – to be accompanied by an adult – go free). There is free parking for those attending the event. 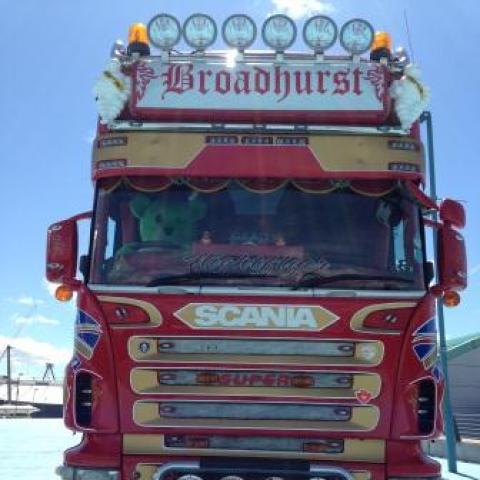