The Great North Truck Show made quite an impact when over 200 trucks took over the Etihad Stadium in July. Paula Jones and Karl Gratton arranged the show, the first of its kind in Manchester, to raise funds for Royal Manchester Children’s Hospital Charity (RMCH Charity).

Held over two days, the pair raised an incredible £11,438.95 for the charity’s Helipad Appeal to build a designated helicopter landing pad on the Central Manchester site. This week they handed over a cheque to Community Fundraising Manager, Angela Rowe, who thanked them for their hard work.

Currently, poorly patients who require an air ambulance must land in a near-by park before being transferred the final mile by road ambulance. An on-site helipad will dramatically help to improve patient’s outcomes by speeding up the transfer of those in need of the hospital’s specialist emergency care.

Handing over the cheque alongside their four year old daughter, Mia, Karl reiterated how important the hospital is to him. When he was just 1 and a half hour’s old medical staff at Pendlebury (the former Royal Manchester Children’s Hospital) discovered he had a complicated umbilical hernia. He was treated immediately at birth and in the words of Paula:

“Basically it is thanks to them he is here almost 50 years on to tell the tale. His mother said they were wonderful.”

There were a wide variety of trucks on show over the weekend which attracted families and truck enthusiasts from across the whole region. Those on display included large American trucks and customised trucks as well as light commercial and working vehicles. There were also trucks of the classic and vintage category.

The Great North West Truck Show was kindly sponsored by Karl’s employer, Broadhurst Transport, owner Stephen Broadhurst from Stalybridge having his own personal connection to the hospital. In 2005 his daughter Georgia was treated for Leukemia at Pendlebury and now still visits Royal Manchester Children’s Hospital for check-ups.

Due to the success of this year’s event Karl and Paula from Ashton under Lyne are already planning the next Great North West Truck which will be held on 16th and 17th July 2016, again at the Etihad Campus.

“Mia, our daughter, loves being involved in everything "truck show" and is already telling us what she wants to do for next year; she loved telling her friends and teacher that she met Humphrey at half term and gave him lots of pennies.

The response for 2016 has already been incredible, we are really excited for next year, and we do believe that this will now become an annual event.   We have already secured the main sponsors for the show which is again Broadhurst Transport and Mark Kendrew Transport.”

“We are incredibly grateful for the fantastic amount of money raised at the Great North Truck Show. We would like to thank every single person who bought tickets and attended the show, as well as all of the truck drivers and exhibitors who gave up their time to display their vehicles. The funds raised will make such a difference to our Helipad Appeal, this will allow the Trust to save many more lives and will increase the chances of a full or improved level of recovery in a great many seriously ill or injured patients.” 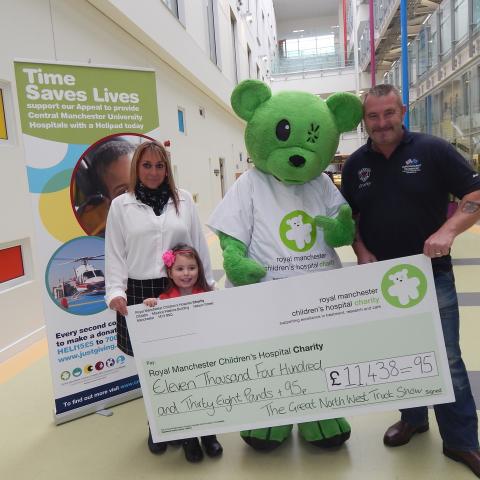